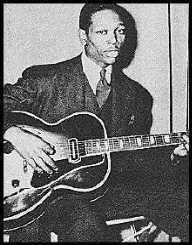 Charles Christian was born on July 29, 1916. He was an American jazz guitarist. He was also renowned as a musician. He died at the age of twenty-five.

Charles Christian was born Charles Henry Christian on July 29, 1916, in Bonham in Texas, United States. He grew up in Oklahoma City, Oklahoma. Christian was brought up alongside two siblings. He started by entertaining people as a dancer. He later learnt how to play guitar. Christian enrolled in Douglass School, Oklahoma City. His music career instinct grew at this school after being persuaded by an instructor. He later left music while still at school due to instrument playing differences. He after that indulged in playing baseball in which he managed and excelled.

Charlie Christian started his professional journey by performing on roads locally across the Midwest. In 1936, he began playing electric guitar thus being more famous than before. He later joined and performed with renowned performers in Oklahoma City. In 1939, he got an opportunity by auditioning before John Hammond and thus then being referred to Benny Goodman. Christian was hired later in the year to play with Goodman Sextet. His band performance impressed Goodman that he increased his wage form 2.50 dollars per night to 150 dollars on a weekly basis.

In 1940, he was elected to join Metronome All Stars due to his outstanding swing and Jazz performance. His solos were identified as those with ‘Horn-Like’ outlook. In 1941, he showed out his skills in the Minton’s and Monroe’s recording thus being considered as a fully developed musician.  Christian’s type of music play became famous and thus was known by the name ‘Bebop’ hence a significant contribution in the musical industry. Christian not only played the guitar in the recordings but also sang.

Charlie Christian was married to Margretta Lorraine Downey with whom they were blessed with one child. He died on March 2, 1942, of deteriorated health in Staten Island, New York.