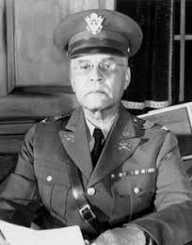 Benjamin Oliver Davis Sr. was born in the city of Washington, D. C. When he joined the army; he claimed that he was born on July 1, 1877. However, biographer Marvin Fletcher later found a document which stated that he was born in May 1880. It is assumed that he lied about his age to join the army without his parents’ permission. His father, Louis P. H. Davis, was a messenger for the U. S. Department of the Interior. His mother, Henrietta Stewart Davis, was a nurse.

Benjamin O. Davis Sr. was a student at the M Street High School. He also took some classes at Howard University but never graduated.

From 1905 to 1909, he worked as Professor of Military Science and Tactics at Wilberforce University in Ohio. In 1910 and 1911, he served in Liberia. In 1912, he joined Troop I at Fort D. A. Russell, Wyoming. He was then assigned to patrol the border between Mexico and the United States. From 1917 to 1920, he became a supply officer and commander of 1st Squadron at Fort Stotsenburg, Philippine Islands.

From 1920 to 1924, Benjamin O. Davis Sr. worked as Professor of Military Science and Tactics at Tuskegee University in Alabama. From 1924 to 1929, he was an instructor with the 2nd Battalion in Cleveland, Ohio. He then returned to his teaching position at Wilberforce University.

Benjamin O. Davis Sr.  then became an assistant in the Office of the Inspector General in Washington, D. C. He made several inspection tours of African-American soldiers stationed in Europe. From 1944 to 1945, he worked with the General Inspectorate Section of the Communications Zone.

He then became an assistant to the Inspector General and special assistant to the Secretary of the Army. In 1947, he visited Liberia as an official representative of the United States. He finally retired from the military in 1948. He was a member of the American Battle Monuments Commission from 1953 to 1961.

The U. S. Army awarded Benjamin O. Davis Sr. with the Distinguished Service Medal, the Bronze Star Medal, and the Army of Occupation Medal. He also received the Spanish War Service Medal, the World War I Victory Medal, the World War II Victory Medal, the American Campaign Medal, and the European African Middle Eastern Campaign Medal. He received the Croix de Guerre from France and the Order of the Star of Africa from Liberia. The U. S. Postal Service created a stamp featuring Davis in 1997.

In 1902, Benjamin O. Davis Sr.married his childhood friend Elnora Dickerson. Their son, Benjamin O. Davis Jr, went on to become the general of the U. S. Air Force. They had two daughters, named Olive and Elnora. His wife passed away in 1916, days after giving birth to their younger daughter. In 1919, he married an English teacher named Sarah Overton. They were together until her death in 1966.

Benjamin O. Davis Sr passed away at the Great Lakes Naval Hospital in Chicago on November 26, 1970. His body was buried at the Arlington National Cemetery in Virginia.