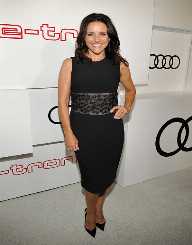 Before becoming an actress, Julia Louis-Dreyfus studied theatre at the Northwestern University in Illinois.

The first noteworthy appearance of Julia Louis-Dreyfus on screen was in 1982. She was cast in the Saturday Night Live show for three years until 1985. Interestingly, she was the first female cast member who has joined the team at such a young age. She was only 21 years old then.

On this show, Julia Louis-Dreyfus met many prominent actors, for example, Jim Belushi, Martin Short, Eddie Murphy, and many more. Even though her performance on the show was brilliant, she had stated that she was not always too confident.

After leaving the Saturday Night Life show, she participated in many movies. In 1986, there was “Hannah and Her Sisters” and “Soul Man,” in 1989 “National Lampoon’s Christmas Vacation.” Later she was a part of the show “Day by Day” that aired only for two years.

Since 1990, Julia Louis-Dreyfus was playing a role in a television show “Seinfeld.” It lasted until 1998. Interestingly, her character did not appear only in three episodes during the whole nine years. Initially, there was no character for Julia Louis-Dreyfus, but for the show to have some more “feminine energy,” the creators of the show added Julia Louis-Dreyfus into it. Her work in the show was highly appreciated, and she won several and was regularly nominated for awards.  The last episode of “Seinfeld” aired on 1998, and broke the record for the most-watched television event – more than 76 million people watched the last episode of “Seinfeld.”

Since then she has continuously appeared on screen in different movies and films and received several awards and nominations.

In 2006 Julia Louis-Dreyfus received a Primetime Emmy Award for her role in  “The New Adventures of Old Christine” show as an Outstanding Lead Actress in a Comedy Series and several other nominations.

After “Seinfeld,” Julia Louis-Dreyfus participated in several movies and shows. She voiced several animated movies for Pixar. The show “Watching Ellie,” where Julia Louis-Dreyfus played a jazz singer, was very successful. The first episode alone was watched by over 16 million people, and on average 10 million people watched the show every week during the first season. The second season, unfortunately, was less successful, only around 8 million people watched this show every week. The show was canceled in 2003 because of the reducing numbers of audience.

After the cancellation of the show, a rumor spread out. It stated that a “Seinfeld curse” exists. “Seinfeld curse” means, that none of the people from that show had ever been successful after participating in it. Julia Louis-Dreyfus strongly disagreed that such curse exists and blamed media for coming up with it.

From 2005 to 2010 Julia Louis-Dreyfus participated in a television show “The New Adventures of Old Christine” that had excellent reviews and good audience statistics. In 2006 Julia Louis-Dreyfus returned to Saturday Night Show as a host for one episode and was invited back also a year later in 2007.

In 2010, Julia Louis-Dreyfus received a star on the Hollywood Walk of Fame. She won the sun no. 2,407, for her work as an actress and comedian. The first lead, unfortunately, had her name misspelled, so it had to be changed. After the correctly spelled sun was installed, the first was given to Julia Louis-Dreyfus.

After receiving the star on the Walk of Fame, Julia Louis-Dreyfus appeared on screen in several television shows and episodes: “Web Therapy,” “30 Rock”, “Saturday Night Live” and others.

In 2011, Julia Louis-Dreyfus starred in a short film together with her husband, Brad Hall. Brad Hall was responsible for writing and direction, and Julia Louis-Dreyfus was the lead actress. The name of the film was “Picture Paris.” The documentary aired in 2012 and received mixed reviews.

Julia Louis-Dreyfus met her husband Brad Hall when she was studying theatre at the Northwestern University. They married quite soon after meeting, in 1987. They have two children, born in 1992 and 1997.

In 2000, Julia Louis-Dreyfus supported Al Gore, in 2008 and 2012 Barack Obama’s presidential bid. She was firmly against the Keystone XL pipeline project and participated in a video, where she expressed her attitude towards it. The most significant concern was regarding a potential leak, which would create massive pollution.

This is not the only environmental movement she has taken part in. She has also supported “Heal the Bay,” “Natural Resources Defense Council,” “Trust for Public Land.”