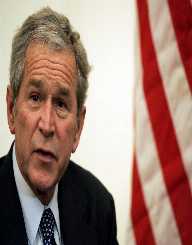 Born on July 6, 1946, George Walker Bush is an American politician and the 43rd president of that country. His term of office was from 2001 to 2009. Bush was born in a family of politicians, and his father George H.W Bush was the 41st president of the United States of America. Hence George Bush became the second to John Quincy Adam to ascend to the Oval Office as apresident whose father were former presidents of the United States of America. Before becoming a POTUS, George Bush served as the 46th Governor of Texas from 1995 to 2000. He had unsuccessfully run for the House of Representative in 1977. Shortly after taking office,  United States was hit by the popular September 11, 2001, terror attack and he responded with the war in Afghanistan in 2001 and the invasion of Iraq in 2003 on their alleged production of chemical weapons and nuclear weapons which have not been proven till date.

During his term of office, he introduced some economic policies, amended the constitution to prohibit same-sex marriage, introduced social security reforms, health care, and educational policies were also introduced. His administration was not free from criticisms especially on his decision to go to war in Iraq and how he handled the aftermath of that war. In two ways, he became famous and also unpopular with most of his policies and is known as a war monger.

George Walker Bush was born on July 6, 1946, in New Haven, Connecticut at the Grace-New Haven Hospital currently known as the Yale-New Haven Hospital. He was born to George Herbert Walker Bush and Barbara Pierce. His father was a vice president to Ronald Reagan from 1981 to 1989 and became the president of the United States from 1989 to 1993. George Walker Bush was the first child with four siblings Jeb, Neal, Marvin, and Dorothy all raised in Houston, Texas. He started his education in Midland, Texas where he completed his seventh grade. When the family moved to Houston, he attended The Kinkaid School and later to the Philips Academy boarding school in Andover, Massachusetts. While there he was involved in sports and played baseballs and also in his senior year became a cheerleader. After his graduation, he enrolled at the Yale University in 1964 and graduated with Bachelor of Arts degree in history in 1968.

He was a Delta Kappa Epsilon and became its president in his final year and also a cheerleader while at the University. He also participated in sports becoming a rugby union player and on Yale's 1st XV. Bush was also a member of the Skull Bones Society. After his degree, he served in the Texas Air National Guard. After two years he was moved to Houston where he flew the Convair F-102s with the 147th Reconnaissance Wing out of the Ellington Field Joint Reserve Base. His pot as a pilot came with several criticisms as it was seen as politically motivated due to his father's influence. He was suspended from flying in 1972 due to his failure to undertake a scheduled physical test. On November 21, 1974, he was honorably discharged from the Air Force Reserve.  He did his masters at the Harvard Business School in 1973 and graduated with an MBA in 1975.

George Walker Bush is married to Laura Welch since November 5, 1977. The couple was first blessed with twins Barbara and Jenna on November 25, 1981. Bush later life was highly influenced by Laura as he was used to alcohol abuse prior to their marriage but it changed after their marriage. One of such alcohol abuse was on September 4, 1976, when he was charged with driving under the influence of alcohol and find $150 with his driving license being briefly seized.

George Bush established an oil exploration company Abbusto Energy in1977, but it became operational in 1978. The company's name was later changed to Bush Exploration. He became the chairman after the company merged with Spectrum 7 in 1984. With the decrease in oil prices at the time, the company was financially incapacitated and therefore became part of HKN, Inc, with Bush becoming a board member of the HKN Board of Directors. With his interest in baseball since childhood, he purchased a majority share in the Texan Rangers baseball franchise in April 1989. She served as the managing general partner for five years. In 1998, he sold off his shares for $15 million after his initial investment of $800,000.

Bush first attempt to get a political power was in 1978 when he contested for the House of Representative in Texas. His main opponent, Kent Hance of the Democrats, was able to capture the seat with 53.2 percent while Bush had 46.8 percent. In 1988, he joined his father, George Herbert Walker Bush's presidential campaign team by moving with his family to Washington D.C. He served as an integral member of the campaign team by taking up the positions of advisor and liaison to the media. His father won the election, and again he was part of his re-election campaign team during the1992 presidential election campaigns.

During the 1994 Texas gubernatorial election, Bush decided to contest for the governorship of Texas. He campaigned on four thematic areas being tort reforms, improvement in education, welfare reforms and crime reduction. He was able to win the slot of the Republican Party and was now set to face the incumbent Ann Richards of the Democrats Bush was able to win the election with 53.5 percent against Richards' 45.9 percent. His term as governor saw the introduction of policies like a tax cut, improvement in education and ensuring the general well-being of the people.

He provided funding to organizations, which were into educating the people against alcohol, drug use, and domestic violence. Busch became very popular among the people, and 1998 was re-elected into office. He instituted June 10, 2000, as Jesus Day in Texas and asked the people to show love to the needy during that day. Just a year into his second term of office, he decided to go higher by seeking the 2000 presidential nomination of the Republican Party.

George Bush announced his candidacy for the Republican slot to contest the 2000 presidential election. Other contenders were John McCain, Alan Keyes, Pat Buchanan, Orin Hatch, Gary Bauer among several others. HIs campaign was centered on the tax cut, increasing the size of the United States Army and improving education. He won the nomination and chose Dick Cheney as his running mate. He contested against Democrats Al Gore in the 2000 general election. Bush was able to win 29 seats including that of Florida.

However, the closeness of the polls in Florida resulted in a recount and finally ended in the Supreme Court to what became the Bush vs. Gore ruling. He was declared a winner at the end of all controversies becoming the first American president to win fewer popular votes than another candidate since 1888. He contested again in 2004 and won to serve a second term.

George Bush presidency had its own good, bad and the ugly terms. During his first term, he went to two wars, Afghanistan in 2001 and the Iraqi war in 2003 in his fight against terrorism. Prior to the end of his second time, America was hit by the longest post-World War II recession in 2007. He introduced policies to improve upon the educational standard and increased the funds for National Science Foundation. He also funded the National Institutes of Health to improve health.