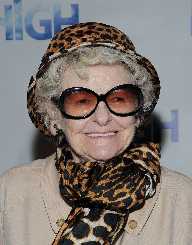 Elaine Stritch was born on February 2, 1925, in Detroit, Michigan, USA.

As a young adult, Elaine Stritch attended the New School for Social Research.

Elaine Stritch’s professional theater acting career began in the mid-1940’s. She first appeared on Broadway in the 1946 play Loco. Throughout the rest of the 1940’s, she acted in two more Broadway plays Angel in the Wings and Yes, M’Lord.

By the 1950’s, Elaine Stritch was starting to gain some fame as a theater actress, which allowed her to take on many more roles, and larger roles, than the ones that she had taken on in the 1940’s. During the 1950’s, she appeared in six Broadway plays, including Bus Stop, Goldilocks, and On Your Toes. She also went on a US tour while performing in the play Call Me Madam as Mrs. Sally Adams.

During the 1960’s, Elaine Stritch only appeared in two Broadway plays: Sail Away and Who’s Afraid of Virginia Woolf? However, she did appear in several off-Broadway plays, and she went on tour again, this time for the play Mame, in 1968.

Elaine Stritch did not appear in any Broadway plays during the 1970’s. She did go on one national tour, in 1971, for the play Company. She only appeared in two other plays, both West End productions: Company and Gypsy.

Elaine Stritch began to be more active on the stage again in the 1990’s. She was a performer in four Broadway plays during this decade. These plays include Company, Show Boat, A Delicate Balance, and Angela Lansbury - A Celebration. She also appeared in Off-Broadway productions of Cakewalk and Sail Away.

Elaine Stritch’s screen-acting career began around the early 1950’s. For most of her television and film acting, she took on small roles in movies and television shows. Some of the shows she worked on in the 1950’s included Appointment with Adventure, The Scarlet Hour, The Edge of Night, and True Story. She also had roles in the films A Farewell to Arms and The Perfect Furlough.

In 1960, Elaine Stritch earned her first major recurring television role on the show My Sister Eileen. She played the character Ruth Sherwood on this show for almost 30 episodes. She later earned another recurring role in 1965 on the show The Trials of O’Brien. She acted on this show as Miss G for a season. Some of her other works from this decade included The Doctors and the Nurses, Too Many Thieves, and One Life to Live.

Elaine Stritch earned her next recurring television role in 1973, on the TV mini-series, Pollyanna. She played Aunt Polly on all six episodes of the show. Her next recurring role came in 1975 as Dorothy McNab on Two’s Company. She played this character on and off until 1979. During this decade, she also appeared in small parts in several television shows and movies, including Dial M for Murder, The President’s Last Tape, and Providence.

Elaine Stritch only had one major recurring role in the 1980’s, which was on The Ellen Burstyn Show from 1986-1987. For the rest of the decade, she mostly acted in made-for-television movies, including Nobody’s Perfect, Christmas Spirits, and Stranded.

Elaine Stritch didn’t really have any ‘major’ recurring roles on television shows in the 1990’s. However, she did appear on a few episodes of the shows Law & Order, An Inconvenient Woman, and The Cosby Show. For most of the decade, she only appeared in small roles in movies like Cadillac Man, Steel Magnolias, and Out to Sea.

Stritch’s next (and last) major recurring role on a television show was on 30 Rock as Colleen Donaghy. She acted in this role over several episodes from 2007-2012. Some of the other shows and movies she appeared in from 2000 to 2014 include 3rd Rock from the Sun, Monster-in-Law, ParaNorman, and River of Fundament.

During both her stage and screen acting career, Elaine Stritch has won an impressive amount of awards. Some of her best awards are listed below.

Elaine Stritch died on July 17, 2014, in Birmingham, Michigan, USA. She was 89 years old when she passed away.