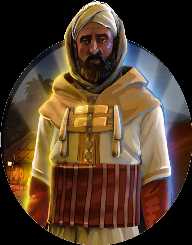 Muhammad Ahmad was born on August 12th, 1845 in Dongola, Sudan. He was rather different from his siblings since he showed a strong penchant for religion. His father was a boat builder. He took spiritual lessons from renowned religious leaders in Sudan. It is from here that his special inclination to Islam grew.

In 1881, Muhammad Ahmad declared that he was the Mahdi. This is a term that meant he was the messiah of the Islamic faith. During this time of proclaiming himself as the true Messiah, the Sudanese people were suffering at the hands of the Turco-Egyptian sovereigns. Therefore, they relied on his beliefs as their messiah. Through the belief that people had in him, Ahmed led a successful revolution against the Turco-Egyptian monarchs.

Muhammad Ahmad was born on August 12th, in 1845. Abdullah, his father worked as a boat builder. Years passed, and his father moved to the largest city in Sudan called Karai. Since childhood, Ahmad showed a special liking to Islam theology. Fortunately, he was taught by renowned religious sheiks in Sudan such as Sheikh Muhammad al-Dikayr and Sheikh al-Amin al-Suwaylih. With the kind of influence that Ahmad gained from his peers, he went on to live with Sheikh Muhammad Sharif. This was from the year 1861 to 1868. After this long period of studying and mastering the Islamic religion, he earned himself the title of a Sheikh.

After being one of the Sheikhs, this meant that he was in a position to offer spiritual teachings to new religious members. In 1870, his family migrated to Aba Island. Muhammad Ahmad constructed a mosque that would allow him to continue teaching the Quran. His style of teaching and spiritual loyalty earned him recognition and love from his students. In 1872, he welcomed his sheik teacher, Sharif to join him in Aba Island. The two lived together for a period before their differences set them apart. In 1878, Sharif expressed dislike to the hero worship that Ahmad received because he was his student. For a short period, the Sharif-led public arguments against him. Eventually, this led to the exclusion of Ahmad from the Samaniyya sect which had crowned him as a sheik.

Muhammad Ahmad joined a rival leader of the Samaniyya sect and shortly after he was made its leader following the death of Sheikh al-Qurashi who was their leader. After that, Ahmad proclaimed that he was the Mahdi; an Islamic prophet. He took his time to prove himself worthy by the use of comparisons. Sooner or later, he wanted his sect to be different in Sudan and therefore gave it the name Ansar.

After confrontations with the Egyptian government, he initiated a jihad. This was a revolution that was against the Turco-Egyptian sovereigns. He had given orders to his followers that they should destroy Turks if at all they crossed paths with them. Muslim believers saw his intentions as true depictions of blasphemous acts. Nonetheless, Ahmad moved to central Sudan and lived in Kurdufan.

While residing in Kurdufan, he came up with a strong force that would liberate their land from the Turco-Egyptian monarchs. In 1883, they successfully stopped an Egyptian army that was composed of 4000 soldiers. After this victory, they went on to fight in the Battle of El Obeid where they also emerged victorious over an army of 8000 Anglo-Egyptian soldiers. These conquests meant that Ahmad had seized western Sudan. However, Ahmad and his troops were later defeated in the Battle of El Teb.

Muhammad Ahmad gained his fame for leading a strong revolution with his Samaniyya disciples against the Turco-Egyptian sovereigns. This led to his ruling for some period in Sudan.