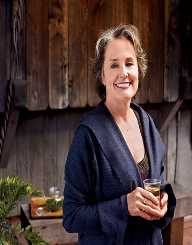 Alice Louise Waters is an American chef, restaurateur, and activist and the founder of Chez Panisse Foundation. Born on April 28, 1944, she owns the restaurant, Chez Panisse, in Berkeley, California opened in 1971.

The restaurant is famous for its use of organic and locally grown in ingredients. She is a member of “slow food” movement, aimed at preserving local food as the healthy way to go and oppose fast food.

Waters is also an author and has written many books on cuisines including Art of Simple Food I and II, Chez Panisse Cooking and 40 Years of Chez Panisse. She released a memoir coming to my Senses: The Making of a Counterculture Cook in 2017.

She graduated in 1967, with a degree in French Cultural Studies. While at Berkeley, she had the chance to travel to Paris where she enhanced her cooking expertise by using local ingredients to prepare fresh food. Waters considers food as the way of life and not just getting something to eat.

Alice Waters opened Chez Panisse in 1971. She collaborated with Jeremiah Tower, who created the recipes. Her initial aim for establishing the restaurant was to serve as a venue for entertaining her friends.

The restaurant used locally produced ingredients, which Tower transformed into a great menu. She later found it difficult sourcing fresh and quality ingredients and therefore built a network of local farmers and producers to continue having a reliable stream of supply. In 1980, Waters opened the Chez Panisse Café, where they serve a la carte menu for lunch and dinner. She then opened the Café Fanny in 1984 and closed it in 2012.

Alice Waters became a member of the Free Speech Movement, back in Berkeley. As an opponent of the Vietnam War, she joined the congressional campaign of Robert Scheer, who was an anti-Vietnam war politician. Waters is also a food activist and promotes the use of ingredients grown in local farms for dishes. In 1996, she founded the Chez Panisse Foundation aimed at transforming public education through using food to teach.

One of the main aims of Chez Panisse Foundation is to develop and maintain the Edible Schoolyard program at Martin Luther King, Jr. Middle School in Berkeley. In 1995, she established the Edible Schoolyard, which is a 1-acre (4,000 m2) organic garden and kitchen classroom. The garden affords student at the middle school to plant, harvest, and prepare foods from the ingredient.

This is aimed at enhancing the environmental and social well-being of the school community. She also has the School Lunch Initiative aimed at making a fresh, healthy, and sustainable meal a part of the school day.

Alice Waters has several books to her credit including Chez Panisse Pasta, Pizza, Calzone, 1984, Chez Panisse Menu Cookbook, 1995, Fanny at Chez Panisse: A Child's Restaurant Adventures with 46 Recipes, 1997, Chez Panisse Cooking, 2001 and Carlo Petrini; William McCuaig in 2004. She also wroteThe Art of Simple Food, 2007, In the Green Kitchen: Techniques to Learn by Heart, 2010 and To come to My Senses: The Making of a Counterculture Cook in 2017.

Alice Waters is married to Stephen Singer since 1985. The couple has a daughter Fanny Singer.

Alice Waters has received several awards including the James Beard Foundation’s Best Chef in America in 1992 and the James Beard Humanitarian Award in 1997. She has a Lifetime Achievement Award from the Bon Appetit magazine, 2000 and Global Environmental Citizen Award by  Harvard Medical School in 2008.

Alice Waters is a Member of the American Philosophical Society and an Inductee of the National Women’s Hall of Fame in 2017.