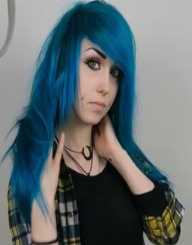 HeyThereImShannon, real name Shannon Taylor was born on July 22, 1997, in Illinois, United States. She has a younger sister Bailey. Taylor is a part of the My Digital Escape channel together with Alex Dorame and Kyle David Hall. She joined the channel in 2015. She was in a relationship with her co-star and co-singer Tyler Hagen. She announced of their separation in a video titled We Broke Up.

Shannon Taylor created her YouTube channel HeyThereImShannon in July 2010. She began posting videos on her channel and is best known for her different funky hairstyles. Her first videos were mostly on how to dye your hair in different unconventional colors. She posts videos on hairdressing tutorials and personal information about her life. Besides her beauty videos, Taylor also posts music videos. She is a talented songwriter and singer.