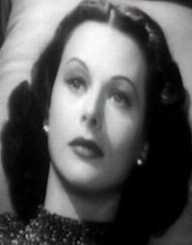 Actress Hedy Lamarr was Hedwig Eva Maria Kiesler on the 9 November in 1913 in Vienna, Austria. Her father, Emil Kiesler, was a prosperous banker who had been born in Ukraine. Her mother Gertrud Kiesler was a concert pianist.

Her beauty was apparent from an early age, and at 17 she made her film debut in Geld auf der Strase, a German film. She acted in various other European productions. Then in the early 1930s, she was noticed by Hollywood producers after she starred in Ecstasy (1933). The Czech film which contained Hedy Lamarr in a nude swimming pool scene and was banned in the U.S. The Pope denounced Ecstasy (1933), but Mussolini allowed it be shown at the Venice Film Festival.

In 1937 Hedy Lamarr signed a contract with MGM and moved to Hollywood. She changed her name to Hedy Lamarr and made her American debut in Algiers (1938) starring alongside Charles Boyer. The film did well at the box office. She went on to star alongside Spencer Tracy, Jimmy Stewart, and Clark Gable. Films she starred in include: Tortilla Flat (1942), White Cargo (1942), Samson and Delilah (1949), Cooper Canyon (1950), A Lady Without Passport (1950), My Favorite Spy (1951), The Story of Mankind (1957) and The Female Animal (1957). Hedy Lamarr’s career faded in the late 50s.

Hedy Lamarr’s first husband, was Friedrich Mandl, a wealthy Australian military arms merchant whom she married in (m.1933-div.1937) when she was 19 years of age. The marriage was not a happy one, and in her autobiography, she said that he was controlling, did not approve of her acting career and that he had business dealings with both Nazi Germany and Mussolini. She was exposed to various discussions relating to military technology which later led to her co-creating a patent in the U.S. in 1945. During World War II (1939-1945), Hedy Lamarr and George Antheil patented a system which centered around the blocking of signals from radio-controlled missiles.

At the age of 38, in 1953, Hedy Lamarr became a naturalized U.S. Citizen. In 1966, an autobiography in her name was published, Ecstasy and Me (1966). She later disassociated herself from the publication, claiming that a ghostwriter had written the book and that it contained fabrications.

Hedy Lamarr died at the age of 86 in Orlando, Florida.

Hedy Lamarr was involved with the publisher of her autobiography. She claimed that the ghostwriter, Leo Guild, had distorted and lied. She, in turn, was sued by Gene Ringgold who claimed that the autobiography contained content about her that he had written for Screen Facts magazine in 1965.