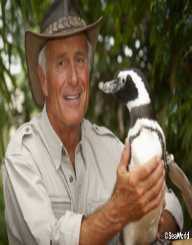 Jack Hanna is also known as Jungle Jack. He is currently Director Emeritus of Columbus Zoo and host of Jack Hanna's Animal Adventures and Jack Hanna's Into The Wild. His latest show: Jack Hanna’s Wild Countdown is broadcasted from his home turf, the Columbus Zoo, and Aquarium. Jack Hanna is considered to be one of the world’s leading animal experts, despite not having any academic qualification in Animal Sciences.

John Bushnell Hanna, better known as Jack Hanna was born on January 2, 1947. He has a brother, Bush Hanna and sister Sue. He was born in Knoxville, Tennessee and lived on a farm when he was five years old. His first contact with animals came then when he had to milk cows and tend to the farm animals.

His first job was working for Dr. Warren Roberts, the veterinarian of Knoxville Zoo and Knoxville Animal Clinic. The early summer he worked with Dr. Roberts was unpaid, cleaning cages of patients in the clinic. At the age of eleven, Jack Hanna knew that he loved animals enough to work with them his whole life.

Jack Hanna was not particularly gifted in academics. He went from a private day school, Webb, to Kiski, a boarding school in Saltsburg, Pennsylvania. After Kiski Jack entered Muskingum, an arts college in Ohio. Jack brought a donkey along, which would later become the mascot of the school. The donkey also helped him meet his future wife, Suzi Egli. The couple was engaged during their junior year and married on December 20, 1968.

He graduated from Muskingum College with Bachelor of Arts, completing a double major in business and political science in 1969.

After a string of failed odd jobs, Jack Hanna started the Pet Kingdom and continued to buy animals for his private zoo at home. After an incident with his pet lion and a kid, the Hanna family moved to Georgia to work. In 1973, Jack Hanna became a director at the Central Florida Zoo in Sanford. In 1975, Jack Hanna took a break due to his daughter Julie needing treatment for leukemia.

In 1978, Jack Hanna returned to animal world by becoming the director of Columbus Zoo and Aquarium. Recognizing the need to raise awareness and reputation of the zoo, Jack hosted many educational programs. He also networked to funds to develop the zoo to more natural habitats, replacing the caged animal enclosures.

Under his advice and guidance, the Columbus Zoo added the Zoombezi Bay waterpark, the Wilds, the Safari Golf Club. In 2014, the opening of Heart of Africa – a vast 43-acre African savanna was celebrated.

At present, Jack Hanna is still dedicated to educating masses about animals, their habitats and why conservation is important. Under his guidance, Columbus Zoo remains a popular destination for tourists. Its role in animal conservation remains large.

Jack Hanna first become Jungle Jack until his commercial in Cosequin. He accepted an invitation to appear on Good Morning America in 1983. It was to promote awareness of the birth of the twin gorillas in Columbus Zoo. Since then he was invited to various shows like Late Night with David Letterman and Larry King Life. His easy-going character allowed him to entertain the masses while educating viewers about zoo’s animals. He was then asked to do stints as a wildlife correspondent for FOX, CNN, and other major news programs.

In 1992, he decided to become director emeritus, letting others run the in and outs of zoo operation. Following his step up, Jack Hanna launched a few television series. Starting with Jack Hanna's Animal Adventures. He had three more shows, all hosted within compounds of Columbus Zoo and Aquarium.

In addition to shows, Jack published two autobiographies. His first book was in 1989, which titled Monkeys on the Interstate. He also announced two more animal-related books, mainly aimed at children.

In 1991, Jack Hanna created Partners in Conservation (PIC) and worked to conserve mountain gorillas in Rwanda. It was a grassroots project that was paramount in educating the world and making a difference to their life in the wild. He teamed up with actress Natalie Portman to create a television special, highlighting the plight of the gorillas in Rwanda.

Jack Hanna is an honorary board member for Canine Companions for Independence.He is also a supporter of the following charities: Big Cat Rescue, Kids Wish Network, and National Wildlife Federation

The most important thing is to preserve the world we live in. Unless people understand and learn about our world, habitats, and animals, they won't understand that if we don't protect those habitats, we'll eventually destroy ourselves.