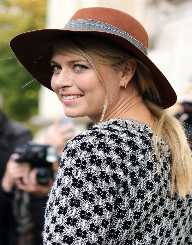 Maria Yuryevna Sharapova is a beautiful, blonde and leggy damsel. I don’t have other undefined adjectives to define her. If I happen to tell you about her personality, then I will be blabbering from end to end without a full stop. She might probably be compared to Anna Kournikova when it comes to the modeling field. Trust me! Maria is a no stagger when she dazzles on the tennis stretched court. No wonder she delivers penetrating strokes and confident performance. All her periodic moves are unpredictable. Sharapova officially arrived with her Wimbledon recognition in 2004. As a side note; she is not planning to leave the Tennis industry soon.

On April 19, 1987, Maria Sharapova was born in a Western Siberia town called Nyagan, Russia. At the age of two her parents; Yelena and Yuri fled and lived in Belarus to decrease the rate of getting radiation. They opted to move further in Black Sea town that was earlier known as the resort village.

Yuri worked as an engineer in Nyagan, but as they continue their nomadic life; he did everything to feed his family. Being an only child, Maria was reminded by her hardworking parent to taste the journey of life with wisdom. She loved to dance, listen to music as well as doing athletics.

She later discovered that her talent fully majors on one thing - Tennis. This happened when one of her neighborhood friends was given a tennis racquet as a gift. She got a chance to hold on to it for some days. I am telling you, she used to crack, cut-down and go round and round without stopping. Every day and hour she had to ping the ball against the side of a wall or house.

At the age of six, Maria’s father was encouraged by a local coach to take her to Moscow and be chosen for Russian Tennis Federation. In the process, she wowed every audience, not to mention the coaches as well. But things weren’t that juicy in Russia as the adage continued to change day by day.

After the Russian government had suggested that they could earn from other efforts, they opted to develop their program further. They received immediate finding what gave them a chance to perform at the Olympics. Later on, Martina Navratilova, one of the coaches told Yuri to try the US tennis program.

In 2001, Maria Sharapova showed her tennis skill when she was 14 years of age. With her compelling nature, she made her name to be known on the tennis court. At 16, she managed to win her first tournament. After one year, she managed to defeat Serena Williams and won the Wimbledon tournament in 2004. The success made 6-foot Maria a global star, and she went home with a million dollar deal from Motorola, Nike, and other famous brands. Her dominating and winning looks made her be loved by everyone. Besides, she also became famous for her buoyant voice when playing on the tennis court. At times she was nicknamed as Siberian Siren since her opponents were intimidated and distracted by her loud noise.

Maria As The Tennis Player

According to tennis rules, one has to make it happen or lose in the process. Maria aims to control one angle continuously. In the process Maria Sharapova tries her best to pin-down the tennis ball in one corner, later she will come to the court of the baseline and pound her opponent. When playing with an expert, she has to equate her moves before running out of the bracket. I love the way she serves to her level best while representing. Her primary strategy relies on strokes.

Maria Sharapova isn’t interested in the game of marriage. She was once engaged to Grigor Dimitrov, but both parted ways in 2015. Unfortunately, she was currently banned from playing tennis till 2018. Reason being that she admitted using meldonium which is an illegal or banned substance. She also denied taking a drug test hence the outcome gave her a two-year suspension.