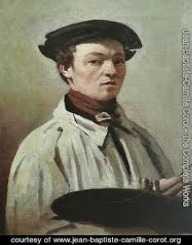 Camille Corot was a French painter.

Jean-Baptiste Camille Corot was born in the city of Paris, France, on July 16, 1796. His mother was a milliner, and his father was a wigmaker. They opened up a millinery shop which became quite popular with wealthy Parisians. Corot briefly attended the Lycee Pierre Corneille in Rouen. He then started working as a draper in a textile shop.

Camille Corot started painting around the age of 25. He opened up a small studio located at Quai Voltaire in Paris. He studied under painters Achille Etna Michallon and Jean-Victor Bertin. Both Neoclassical and Impressionist artists inspired him. From 1825 to 1828, he lived in Italy. There, he studied artworks from the Renaissance and Ancient Rome. During his stay, he created hundreds of drawings and paintings.

The most famous one was the painting The Bridge at Narni. In 1828, he returned to France. His goal was to have his art displayed at the Salon, the official art exhibition of the Academie des Beaux-Arts. He submitted several paintings, but the Salon critics rejected most of them. His only successful painting was the biblical work Hagar in the Wilderness.

Apart from landscapes, Camille Corot also created a few dozen portraits, mostly depicting friends and family members. He started getting more recognition in 1848 when he became a jury member of the Salon. He was soon commissioned to make a religious painting for a small chapel. He became more popular, and his works started selling at a higher price.

His best-known paintings were Macbeth and the Witches, Meadow by the Swamp, La Piazzetta, Ville d’Avray, and others. He took many pupils in his studio, including Camille Pissarro, Charles Le Roux, Eugene Boudin, Stanislas Lepine, and Berthe Morisot.

Camille Corot never married and had no children, so he spent a large portion of his money on charity. He helped out the poor in during the Franco-Prussian War. He financed an orphanage in Paris. He bought a house for artist Honore Daumier, who had gone blind and lost all of his possessions. He gave money to the widow and children of painter Jean-Francois Millet.

Camille Corot suffered from a stomach illness. He passed away on February 22, 1875, in his home in Paris. He was 78 years old, and he was buried at the Pere Lachaise Cemetery.

The 2008 French film Summer Hours features two of Corot’s paintings as a vital part of the story. There is a street named after him in Quebec, Canada. His works are on display in museums and galleries in France, the United Kingdom, the United States, the Netherlands, Russia, Serbia, and Argentina.