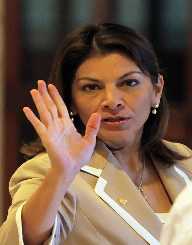 In most of the world, women are maligned and hardly take part in leadership positions. But for a woman to against all the odds make her way into the presidency, it really needs to be commended, and one of such women is Laura Chinchilla. Laura Chinchilla is a Costa Rican position and former president of that country. Born on March 28, 1959, she served as a one-term president from 2010 to 2014. Previously, she had served as one of the two vice presidents under the Oscar Arias Sanchez administration and also a Minister of Justice.

Laura Chinchilla was the first woman president of Costa and the eighth of a Latin American country. Contesting on the ticket of the Partido Liberación Nacional, she gained 46.76%of the total valid votes making her the 46th president of the country.

But before she finished her term of office, she became one of the unpopular presidents in the whole Latin America just behind Porfirio Lobo of Honduras according to polls at the time. Before assuming the president, she worked with some international agencies as a consultant in Latin America and Africa

Laura Chinchilla was born on March 28, 1959, in Carmen Central, San Jose to Rafael Angel Chinchilla and Emilce Miranda Castillo. She was the eldest of four children. His father was a former comptroller of Costa Rica. Most of her childhood education is not known, but she graduated with a bachelor degree in political science from the University of Costa Rica in 1981. She furthered her studies at the Georgetown University, where she pursued a masters in public policy in 1989.

Laura Chinchilla after her first degree worked as a consultant in Latin America and Africa in 1990. She worked for several international agencies in that regard with specialization in judicial reforms and public security. Some of the agencies she worked with include USAID, UNDP where she was a facilitator for studies and project on judicial reforms and at IDB on police reforms. Aside from her work she also mounted several platforms to speak on public security and police reforms. With her experience and trusted capabilities, Laura Chinchilla was involved in several reforms in Latin America like the Project Advisory Committee of Civil Society and Public Safety for the Washington Office on Latin America (WOLA) and Foundation for Peace and Democracy (FUNPADEM).

Later in her career, Laura Chinchilla entered into politics serving in Jose Maria Figueres Olsen administration. Her position was a deputy minister for public security in 1994 to 1996 and a substantive minister of public security from 1996 to 1998. As a minister, she served as the chair of the Chairman of the Joint Drug Intelligence Center and National Immigration Council and.

She was a member of Academic Council of the National Police Academy, National Security Council, and the National Drug Council. Her political influence continued to grow and was appointed into the National Assemble where she served as a deputy for San Jose province in 2002 and held it for two years.

After her four year service at the National Assembly, she was appointed one of the two vice presidents under the Oscar Arias Sanchez administration in 2006. Chinchilla held the position for just two years and resigned because she had a presidential ambition. She contested and won the presidential nomination of her party the Partido Liberación Nacional in 2009.

Laura Chinchilla was able to win the 2010 election on the ticket of the Partido Liberación Nacional. Being the first woman president of Costa Rica, she received several applause and commendations from international bodies and other countries. Notable among them was Baroness Kinnock, The British Foreign and Commonwealth minister in charge of Central America. Prior to the elections, Laura Chinchilla vigorously campaigned on the safety of the people and vowed to clamp down on violence through anti-crime legislation. She was opposed to gay marriage but was quick to add that there was the need to introduce legislations to safe guide the fundamental right of same-sex couples and stated without ambiguity here will to maintain the prohibition of abortion.

She was able to make a great impact on sectors like security and education. On security, she was able to make great improvements in the county’s security which led to a drop in the homicide rate. As a person who believed that education can solve many social problems, she invested heavily in that sector. Laura Chinchilla was able to well implement the Article 78 of the Constitution. “The Strengthening Education Effort” that allowed the government to allocate 8% of the national budget to fund education. Though the funding couldn’t reach the 8% per the constitution, she was able to reach 7.2%, which was the highest in the country and other countries in the region.

Laura Chinchilla had some personal views which influenced some of her decisions in government. To strengthen assistance to the children and the elderly, she signed the National Network of Care Act which she developed from the scratch. She opposed any constitutional amendments to separate the church and the state of which is currently defined as the Republic of Costa Rica as a Roman Catholic nation. Though she believes that marriage should be between a man and a woman, she is in support of LGBT rights.

During her term of office, Laura Chinchilla signed into law new legislation supporting civil partnerships that can be extended to same-sex unions on July 4, 2013. She further stated that if the court legalised same-sex marriage, she wouldn’t oppose to it. After her term as president, she was the leader of the Observation Mission of the OAS tasked to observers the Mexico 2015 federal election. She was also the leader of the mission, which observed that the United States November 2016 election which President Trump won.

Laura Chinchilla got married to Mario Alberto Madrigal Diaz in 1982 but divorced in 1985. He later married Jose Maria Rico Cueto, a Spanish lawyer who she had already given a child within 1996. Their son is Jose Maria Rico Chinchilla.