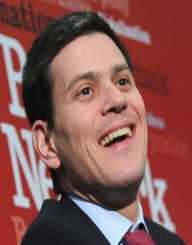 David Miliband was born on July 15, 1965. He is a British politician. He served as a public policy analyst. He also served as a member of parliament as well as chief charity executive. He is currently fifty-three years of age.

David Miliband was born David Wright Miliband, on July 15, 1965, in London in England, United Kingdom. He was born to Ralph Miliband and Marion Kozak. He was brought up alongside one sibling. Miliband attended Primrose Hill Primary School, Camden. He later enrolled in Newlaithes Primary School, Leeds. In 1976, he joined Bradford Grammar School.

In 1978, he enrolled in Haverstock Comprehensive School, North London. In 1983, he graduated with A-levels. He later joined Corpus Christi College, Oxford. He then graduated with a first class Degree in Philosophy, Politics, and Economics. In 1988, he attended the Massachusetts Institute of technology. In 1989, he graduated with masters in Political Science.

David Miliband started by working at the National Council for Voluntary Organizations as a political analyst. In 1989, he worked at the Institute for Public Policy Research as a research mate as well as a political analyst. In 1992, Miliband was appointed the secretary of the Institute for Public Policy Research’s commission on social justice. He later in that year became Head of policy for Tony Blair. He also acted as a contributor to the Labour’s Manifesto. In 1997, after the victory in the elections, he was made the head of the Prime Minister’s Policy Unit. In 2001, he was elected Member of Parliament for the labour stronghold of South Shields.

In 2002, Miliband was appointed schools Minister; junior minister in the Education and Skills department. In 2004, he became the Cabinet Office Minister. In 2005, he got a promotion to serve as Minister of Communities and Local Government in the Office of the Prime Minister. He was later on appointed Privy Councilor. In 2006, he was appointed Secretary of State for Environment, Food and Rural Affairs. In 2007, Miliband was then elected Foreign Secretary.

In 2010 David Miliband ran for a post in Labour Party Leadership. He later lost to his brother Ed Miliband. He, later on, decided to back up his brother by being his shadow cabinet. Later that year he quit from being the shadow cabinet. At this juncture, he continued serving as South Shield’s member of parliament. Miliband also lectured A-Level Government and Politics at Haverstock School. In 2011, he served Oxford Analytica as a Senior Global Advisor.

In 2013, he became the President and Chief Executive Officer of the International Rescue Committee. Miliband currently serves Global Ocean Commission as the Co-Chair.

In 2016, David Miliband was honored with an honorary doctorate from the The New School.

In 1998, David Miliband married Louise Shackleton with whom they have two adopted children. He is currently Fifty-three years of age.