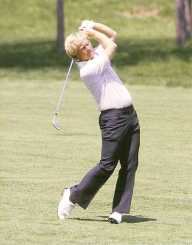 Jack William Nicklaus was born to parents Charlie and Helen. His father was a pharmacist and had three drugstores in Columbus. Nicklaus considered his father as a friend as he always supported him verbally. Through his father, Nicklaus was introduced to golf during his effort to rehabilitate his broken ankle. Jack quickly picked up the interest at such a young age of 10 years.

At the age of 16, Nicklaus was crowned champion at the Ohio Open and International Junior Golf at the age of 17. He was being tutored by Jack Grout of Scioto club. Nicklaus came into full limelight in golf world when he finished second at the 1960 U.S. Open with a score of 282.

This opened the big doors as he turned pro in 1961and went on to win major tournaments and became Player of the year five times. These left many people believing Jack Nicklaus was the most significant player in the golf history.

Around 1957 to 1961, Jack Nicklaus attended Ohio State where he majored in pre-pharmacy in the pursuit of the footsteps of his father after graduation. He, later on, switched to study insurance as he planned to remain an amateur golfer and live by selling insurance. An honorary doctorate was conferred on him on 1972.

Jack Nicklaus emerged as a dominant player during the PGA Tour. He earned the Nickname “The Golden Bear,” because of his power to smash drives with a touch of impressiveness and glamor. His first major professional win was after the 17th start. That is when he overcame Arnold Palmer at a playoff at Oakmont U.S. Open in 1962. His decorations and accolades included - The U.S Open title, Masters Tournament, PGA Championship, and the British Open.

Jack Nicklaus took an active interest in the creation and design of golf courses while still competing as an active player. His production Company, Nicklaus Design, went on to develop hundreds of courses across many countries. He launched wine and Apparel Company and also authored some books. With the assistance of his wife, Barbara, Nicklaus established a Children's Health Care Foundation and worked tirelessly to the benefit of the children.

Jack Nicklaus managed to win the Prize 1971 - PGA Championship as well as the Prize1993 in Englewood - Won Senior Open. He later garnered the most influential person in Golf - four times between 2004-2007 Lifelong contributions to golf - 2007.

In 2006, he scored at the National golf foundation. Later on he was attained as the Father of the year award by Minority Golf Association of America. Even then, Nicklaus was failing to win another major championship for three years after winning the 1967 U.S Open in record-breaking fashion.

Jack Nicklaus married his wife Barbara at the age of 20 in 1960. Their first child, Jack Jr was born in 1961 as he was still hoping to win a professional title as an amateur. The family went on to have five children; Jack II, Nancy, Garry, and Michael. They have 22 grandchildren. Nicklaus and his wife Barbara are known not to keep secrets from each other. He devotes a chapter of his life to his wife and owes much of his mental strength as Golfer to her.

The demise of his 17-month-old grandson, Jake Walter Nicklaus, left him very broken. The son of Steve and Krista Nicklaus was said to have slipped and fell into a hot tub and was pronounced dead at Palm Beach Gardens Medical Center. Jack Nicklaus played later on but significantly mourned the death of his grandson.