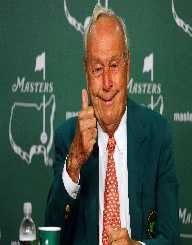 Arnold Palmer, fondly called ‘The King’, was one of the greatest players in the history of the sport of Golf. September 10, 1929, was the day when Palmer was born in a small working-class steel mill town of Latrobe in Pennsylvania. He was the son of Doris Morrison and Milfred Jerome ’Deacon’ Palmer. His father was a head professional and greenskeeper at the Latrobe Country Club. Young Arnold used to accompany his father and watch as he maintained the golf course. That was how Arnold was introduced to the game of golf.

The Arnold Palmer Saga began when he was just four years old and just like his father, swinging his first set of golf clubs, he self-trained himself. By the time Palmer was 17, he had already won two state interscholastic championships.

Arnold Palmer's extraordinary performances earned him a golf scholarship to Wake Forest University.  However, Arnold’s life was turned upside down by the sudden death of his friend and teammate, Bud Worsham. In 1950, Worsham was killed in a car accident. This tragic event rattled Palmer to the core so much so that he dropped out of University in his senior year, broke off all ties from Golf and joined the U.S. Coast Guard.

For three years, Arnold stayed away from his game and education. He used this time to hone his skills and returned to the golf circuit after his enlistment term in the U.S. Coast Guard came to an end. Simultaneously, he also resumed college.

Arnold Palmer’s illustrious career spanned more than six decades. He was not just a famous golfer; he was the first superstar of the sport’s television age. Palmer, with his charismatic and soft-spoken personality, had a profound impact on how the masses perceived the game of golf. Previously, the game which was considered as an elite, upper-class pastime was now being seen as a more populist sport accessible even to the working and the middle-class people.

After a hiatus of 3 years, it took Palmer no time to resume his old form. In 1954, he clinched the US Amateur Title in Detroit and the Ohio Amateur Championship. These consecutive wins were the turning points of his life, and by the fall of 1954, he decided to turn pro.

Arnold Palmer's professional career started on a good note as he got his first pro victory when he captured the 1955 Canadian Open and earned around $2,400 for his efforts. Over the next two years, Arnold continued to raise his game status, displaying dominant performances which bagged him a series of victories.

Arnold Palmer was performing consistently well and had a fistful of wins in his pocket. But, it was his victory in the 1958 Masters Tournament in Augusta, Georgia that catapulted him to success and launched him as the professional golf player the world needs to look out for. Palmer was the tournament’s youngest champion at that time.

By 1960, he signed up as the first client of pioneering sports agent Mark McCormack’s. In this year itself, Palmer also won the US Open and again clinched the title at the Masters Tournament.

Arnold Palmer was at the peak of his game during the years 1960-1963. During this period, he established himself as the world’s best and most successful golfer by winning an astounding 29 PGA Tour events and earning a whopping amount of $400,000 as prize money.

In 1960, after winning both the US Open and the Masters, Arnold Palmer headed to Scotland to take part in The Open Championship with the aim of emulating the feat of winning all the three tournaments in a single year. This feat was earlier achieved by the three big shot golfers - Bobby Jones, Sam Snead, and Walter Hagen. Palmer’s decision to play in The Open drew the attention of the Americans towards their British counterparts. Earlier, very few American professionals had traveled to Britain to participate in this format of the game owing to the travel requirements, relatively small prize amounts and the style of the golf courses which were very different from that of the American ones.

Arnold Palmer's first appearance in the British Open in 1960 was a disappointment as he lost the game by a single shot to Kel Nagle. This defeat did him no harm. Instead, Arnold considers them the four best rounds of his career, and many of his English fans claimed that Palmer may be the greatest golfer ever to play the game. His subsequent wins in 1961 and 1962 convinced his American counterparts that a trip to Britain was worth the effort. This out-of-the-box decision also earned him a vast British and European fan base.

Palmer won a total of 93 titles with seven major tournaments comprising four Masters, two British Opens, and one US Open. His last major victory was at the 1964 Masters Tournament, and that victory made him the first golfer to win the Masters Tournament 4 times (1958, 1960, 1962 and 1964). He represented the US in the prestigious Ryder Cup Matches for six times serving as the captain twice; once in 1963 and again in 1975.

Later in 1980, Arnold Palmer got selected for the Senior PGA Tour (currently known as the Champions Tour). In this phase too, he recorded several big victories including the 1980 PGA Seniors Championship and the 1981 US Senior Open. Even though his dominance on the golf fields was diminishing, he remained the leading money-winner due to his affable nature and his appeal to his sponsors and the public.

An Avid Pilot with a Strong Business Acumen

Arnold Palmer was not restricted to being a golf legend. He had the excellent business acumen and is termed as one of the greatest pitchmen ever seen in the sports world. Under the guidance of his business manager, Mark McCormack, Arnold Palmer began exploring different markets and started investing in automobile and aviation companies. He was the president of Arnold Palmer Enterprises, a company which encompassed most of Arnold’s global commercial activities.

Palmer was also involved in diverse golf-related businesses; he was the owner of Bay Hill Club and Lodge, Arnold Palmer Invitational and the Latrobe Country Club. Palmer helped the sport of Golf reach far and wide by designing more than 300 golf courses in 37 states, 25 countries and five continents including the first modern course built in China. He also developed The Golf Channel.

Arnold Palmer had also learnt how to fly an airplane. He had a pilot certificate and was an avid pilot for 50 years. He last piloted a plane on January 31, 2011, when he flew from Palm Springs in California to Orlando in his Cessna Citation X.

In 1960, Arnold Palmer won the Hickok Belt as the top professional athlete of the year and was bestowed with ‘Sportsman of the Year’ award by Sports’ Illustrated Magazine

In 1974, he made his way into the World Golf Hall of Fame

In 1998, Palmer was awarded the PGA Tour Lifetime Achievement Award

He was the first golfer to be conferred with the prestigious Presidential Award for Freedom in 2004. Five years later, he was also bestowed with the Congressional Gold Medal

Since 2007 till his death, Palmers had been the honorary starter of the Masters Tournament along with friend and competitor Jack Nicklaus

Arnold Palmer had a multi-faceted personality. His magnetic personality combined with thoughtfulness and an unfailing sense of kindness made him one of the most popular and accessible public figures of the time.

Arnold met Winifred Walzer in 1954 at a local tournament in Pennsylvania. They tied the nuptial knot and stayed together for 45 years until Winnie’s death in 1999 due to ovarian cancer. From his first marriage, he has two daughters - Peggy Palmer Wears and Amy Palmer Saunders. Arnold married Kathleen Gawthrop in 2005 in Hawaii. Palmer also underwent a successful prostate cancer surgery and has been a strong advocate of cancer awareness programs and early detection.

Golf’s undisputed King, who inspired the formation of Arnie’s Army, breathed his last on September 25, 2016, at the age of 87. He died in Pittsburgh, Pennsylvania while awaiting heart surgery. Arnold’s legacy is being carried forward by his grandson, Sam Saunders who is a professional golfer.