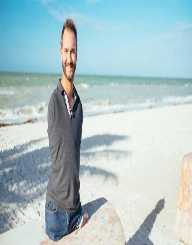 Nick Vujicic is an Australian evangelist and motivational speaker; he is best known for the film The Butterfly Circus.

Nick Vujicic was born on 4 December 1982 in Melbourne, Australia. His parents were Serb emigrants from Yugoslavia. His mother, Dušanka Vujicic, worked as a nurse and his father, Borislav Vujicic, worked in business management. Vujicic suffered from tetra-amelia syndrome and phocomelia, which meant he was born without limbs. His parents found it difficult to deal with their son’s handicap at first, but they eventually accepted it as part of God’s plan, both of Vujicic’s parents were devout Serbian Orthodox. Vujicic also struggled with his handicap and attempted suicide when he was young. Vujicic was excluded from mainstream schools as a child because of his handicap. He was born with feet which he learned to use as hands. He used his feet to write and control an electric wheelchair. He eventually was allowed to attend high school and graduated from Runcorn State High School. He attended Griffith University and received a degree in commerce. Vujicic was deeply religious and attended prayer groups.

Vujicic began his public speaking career at his local prayer meetings, sharing his story with other Christians. Vujicic began to address schools and business as a motivational speaker, but always emphasized the work of Jesus Christ. He founded a non-profit organization, Life Without Limbs, which is based in California in 2005. With Life Without Limbs, he has visited over sixty countries. He also runs a secular motivational speaking company; Attitude is Attitude, which he founded in 2007. Vujicic has been involved in or made several documentaries and films. The most notable was, The Butterfly Circus, which was released in 2009. The film focuses on Will, played by Vujicic, a carnival freak show attraction. Will joins the circus and develops a high dive act overcoming his handicap. The film received great praise at some film festivals.

Vujicic released some DVDs himself.Life's Greater Purpose talks about his childhood and how he came to terms with his disability. In 2010, he released a biographical DVD, Biography of a Determined Man of Faith. Vujicic has also published some books, Life Without Limits: Inspiration of a Ridiculously Good Life published in 2010, Unstoppable: The Incredible Power of Faith in Action published in 2013 and his most recent book, Love Without Limits, which was published in 2016.

Vujicic married his wife, Kanae Miyahara, in 2012. Together they had two sons, and they live in California.

Nick Vujicic describes himself as a born-again Christian, despite his parent's Serbian Orthodox beliefs. His message is seen as being most closely connected to Calvinism, but Vujicic does not identify as part of any specific denomination. He believes that the Bible is without error and is to be taken literally. Vujicic also believes strongly in the immanence of the Second Coming.

Nick Vujicic won the Australian Young Citizen Award in 1990. He also won the Best Actor in a Short Film at the 2010 Method Fest Independent Film Festival for Butterfly Circus.