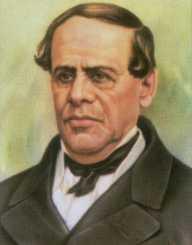 He fought in the Texas Revolution from 1853 to 1836 and the Mexican-American War from 1846 to 1848. Famously known as "the Man of Destiny" he dominated the Mexican political history during the first half of the nineteenth century, an era mostly known as the "Age of Santa Anna." Santa Anna served 11 presidential terms over a period of 22 years in a non-consecutive form.

Santa Anna is mostly apportioned as the cause of Mexico’s turmoil as the country lost most of its territories to the United States starting with Texas. After several overthrow and comeback, Santa Anna was for the last time overthrown during the Revolution of Ayutla in 1854. He went into exile after the revolution spending most of his later years in different countries including Cuba and the United States.

Santa Anna joined the Fijo de Veracruz infantry regiment as a cadet in June 1810 at the age of 16. His parents were not in support of this decision, because they wanted him to have a career in commerce. In 1810, Santa Anna fought in the Mexican War of Independence, sparked by the Catholic priest Miguel Hidalgo y Costilla to rise against the Spanish rule.

Santa Anna served under the command of Jose Joaquin de Arredondo during, from whom he learned how to deal with Mexican rebels. He fought against the Gutierrez-Magee Expedition and in the Battle in Medina while serving in Texas in 1813.

He attained the rank of second lieutenant in 1812 and to captain in 1816. Santa Anna quickly rose to the rank of general when he fought to drive out Spanish forces Veracruz and Iturbide.

On April 1, 1833, Santa Anna won an election to become the President of Mexico for the first time. However, he was not very interested in governing the country and therefore his vice president Dr. Valentin Gomez Farias, took over the governing.

Santa Anna remained in exile in the US until 1837, when the US president, Andrew Jackson allowed his return to Mexico. On his return to Mexico, Santa again gained political influence after his service in the Pastry War against French forces. He lost his left ankle through the war and therefore was amputated, and the leg was replaced by a prosthetic cork leg.

Santa Anna returned to power as President of Mexico in 1838 and a more brutal and autocratic manner. He was forced out of power in December 1844 and was exiled to Cuba in 1845. He returned to the country, leading Mexico to the Mexico-American War, which he was defeated in 1848. In all, he stayed on and off power for 11 terms within 22 years.

His last term in office was from 1853 to 1854, when he was overthrown during the Revolution of Ayutla. During his last term in office, Santa Anna presided over deep corruption and pocketed state funds. He also sold most of Mexico’s territories to the United States and declared himself a lifetime president of Mexico. After his overthrow, and exile to Cuba, the new administration charged him in absentia and his properties were confiscated by the state.

Santa Anna married twice all perceived as “marriages of convenience.” Both marriages were too rich teenage girls, and he never appeared personally in either marriage. He gained considerable wealth from the marriages.

Santa Anna returned to Mexico in 1874 by taking advantage of a general amnesty granted by the then government. He died on June 21, 1876, at age 82 in his home in Mexico City. He was buried in PanteóndelTepeyac Cemetery.