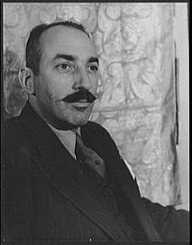 Alfred A. Knopf was an American writer and book publisher who founded a publishing company under his name.

Alfred Abraham Knopf was born in New York City on September 12, 1892. His Jewish parents immigrated from the eastern part of Europe and settled in the US. Knopf grew up under the care of his stepmother. In 1897 his mother killed herself after his father filed a divorce case citing adultery. Knopf had a sister from his mother and a half-brother from his stepmother.

In 1908 he joined the Columbia University to study literature. He graduated from the School of Literature in 1912. He then traveled to England. He met his friend novelist John Galsworthy. Knopf started communicating to the novelist during his days at the university. When he came back to New York, Knopf dropped his wish to study Law at Harvard and resolved to be a writer.

In 1914 he secured resigned from his job and went back to his father. He secured an office and a personal desk within his father’s company. In 1915 he founded his own company Alfred A. Knopf, Inc. He started working on his own publications. In a few months, he released his first work, a volume collection of translated journals of French playwright Emile Augier.

In 1916 he published Green Mansions, a book authored by W. H. Hudson. Knopf switched his focus to scouting for young talented writers outside the US. He was joined by his wife at the company. She became an instrumental figure in the running of the company. Alfred A. Knopf Inc became a formidable player in the publishing industry in the US.  He managed to break into the Eastern European market especially Russia. He continued publishing European authored books for the American public. Knopf became popular with the European writers.

In 1917 just three years into the business, Knopf had published 77 books. Half of the published books were Russian, Asian and other non-English speakers. His success brought in other English speaking and American writers to his firm. In 1918 he got the Borzoi emblem on his books. He became famed for the quality production of his publications. The Borzoi logo became the pseudonym of success and quality.

Knopf was a disciple of history, philosophy, and sociology. As his fame grew, he made friends with American historians and philosophers like Arthur Schlesinger Jr, Richard Hofstadter, and Samuel Morison.

In 1923 Knopf published the work of famed Lebanese American author Khalil Gibran. The book titled The Prophet was well received in literary quarters and arguably became the company’s best seller. Knopf was never invited to the publishing associations. In turn, he formed a publisher’s society called the Book Table. He invited the small and upcoming publishers to its membership. Knopf also invited other interested parties like librarians and booksellers. In 1924 he became the official publisher of American Magazine. He did the publication for a decade.

In 1927 Knopf found himself in unfamiliar waters. The film industry introduced the sound effects to the motion pictures. Book readers moved to the movie theatres for the new phenomenon in town. In 1934 William A. Koshland joined the company. He managed to stir the company out the downfall. Knopf gradually moved out of the financial woes.

During WW2 Knopf temporarily cut off ties with European writers. He turned his attention on Spanish and other Latin American authors. He published many of the Mexican, Caribbean, and other South American upcoming authors.

Despite being a publisher, Knopf was himself an author. He published several books like Some Random Recollections and Portrait of a Publisher. In his career, Knopf published the works of 16 American Nobel Prize-winning authors. Knopf also boasts of publishing the works of 27 Pulitzer Award winners. His achievement has never been matched.

Knopf went to the Yellowstone Reserve in late 1948. He was captivated by the natural beauty and fauna of the reserve. Form the onwards, he worked closely with nature conservation groups in the US.

Alfred Knopf died on August 11, 1984, of cardiac arrest in his home in New York. In 1959 he donated part of his literary work to the University of Texas. The Alfred and Blanche Knopf Library was named after him. He is a recipient of several honorary degrees from American universities.