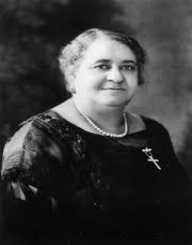 The Entrepreneur, Maggie Lena Walker was born on 15th July 1864 in Richmond, Virginia two years after the end of the American Civil War. Her parents were Elizabeth Draper Mitchell and Lena Mitchell.

While her father was a writer and butler, her mother was a former slave who worked as a cook at Church Hill mansion.

Together with her brother, they grew in College Alley. At a young age, she lost her father living the two children under the care of their mother.

While still a student she became a member of St. Luke, a fraternal organization.  The organization aimed at improving African American's lives both socially and financially.

She completed her training as a teacher in 1883. After completing her education, she returned to her former school where she taught for three years.

Maggie Lena Walker was forced to quit her job as a teacher after her marriage to Armstead Walker Jr. The school’s policy was against married teachers.

Over the next few years, she worked for St. Luke while looking after her family. Her exceptional performance saw her rise to the deputy matron ranks of Order.

Two years after giving birth to her second born child, Maggie Lena Walker was elected as the Order of St. Luke’s Secretary. The organization was on the verge of bankruptcy.

Her first significant action in the organization was opening the St. Luke Penny Savings Bank after that she offered African-American women opportunities and access to affordable goods.

Maggie’s leadership in the bank saw its membership rise to 50,000 in 1,500 local chapters. Despite the fall of several banks during the depression Maggie managed to merge St. Luke with another bank.

After losing her second born child, another tragedy struck Maggie Lena Walker in 1915. She mistook her father for an intruder and shot him.

Having killed him, she was tried for murder but was found innocent.  During that time Maggie was seen to have diabetes. Despite her condition, she continued with her work.

She made a failed attempt to run for the seat of superintendent of public instruction in 1921.

Maggie Lena Walker married Armstead Walker Jr in 1886. She gave birth to her first child, Russell and her second in 1893. Her second child, however, died as an infant.

The last few years of her life saw Maggie confined to a wheelchair because of her diabetic condition. Maggie Lena Walker died on 15th December 1934 at the age of 70.

Her body was laid to rest at Evergreen Cemetery at Richmond. The National Parks Service purchased her home and converted it to a historic site.

In honor of Maggie, Richmond Public Schools constructed built Maggie L. Walker High School. In addition to that National Register of Historic Places converted her house to a museum.