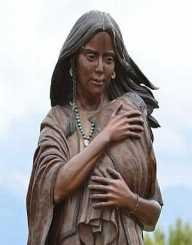 Sacagawea was a Native American woman most remembered for aiding the Lewis and Clark expedition in the Corps of Discovery mission.

Her date of birth is as controversial as her name. Sacagawea was born into the Shoshone tribe between 1788 and 1789 in the region Idaho. Her Shoshone name Sacajawea translated to The Boat Pusher. When she was captured by the Hidatsa tribe, her name was changed to Sacagawea which translated to the Bird Woman.

In 1803 she was traded to a Canadian-French merchant. The trader Toussaint Charbonneau was a longtime associate of the natives. His lifestyle was a reflection of his long contact with them. He spoke some native dialects and had embraced the practice of polygamy. He made Sacagawea one of his many wives.

In 1803, the US purchased the territory of Louisiana from the French colonial administration. Being a vast expanse, an army unit was formed to head its exploration. The unit was code-named the Corps of Discovery. Two lead explorers were tasked to explore and report their findings. They were Meriwether Lewis and William Clark. The two were experienced, former military officers. The expedition was later known as the Lewis and Clark Expedition.

In November 1804, the two had reached the Hidatsa territory in South Dakota. The expedition needed translators well eloquent in French and the native languages. Charbonneau and his wife Sacagawea offered their best bet. He was a native Frenchman, while Sacagawea was eloquent in both Hidatsa and Shoshone dialects of the natives. The expedition took Sacagawea as the only woman on the journey. She was several months pregnant. In February 1805, Sacagawea got her first child Jean-Baptiste. Despite being a nursing mother, she continued with the expedition.

When they entered into the Shoshone territory, Sacagawea was tasked to be the interpreter. They were met by a band of warriors led by the tribal chief. Lewis told her to negotiate for the sale of horses. When she approached the tribal leader, she noticed that it was his brother. He was now Chief Cameahwait. The family reunion proved a blessing for the expedition. The corps bought the horses and supplies they needed for the rest of the journey. Sacagawea went forth with her husband.

The team journeyed up the Rocky Mountains. Sacagawea proved reliable as the lead scout. She located geographical features that helped them maneuver through the wilderness. Sacagawea helped them identify edible plants and fruits. When the tribal natives approached them in the later stages of the expedition, the presence of Sacagawea and her baby proved vital. Native Americans rarely attacked or suspected a band of men with women and children in their midst. When they reached the banks of the Columbus River, Sacagawea procured a fur coat from the natives as a present to the American president.

The expedition reached the Pacific and started heading back. With winter approaching, Sacagawea was again called to suggest the best place to build a fortress and hibernate during the cold months. She suggested a place and Fort Clatsop was built. After the winter her experience with the area aided the crew to easily cross obstacles that were hitherto impossible.

When the expedition was done, Sacagawea and her husband returned to their Hidatsa homeland. Charbonneau was gifted huge tracks of land and a token of cash prize by the US government. When Clark off red them a place to stay in St Louis, the couple traveled but left Jean-Baptiste in the custody of Clark. Jean-Baptiste was to get a formal education under Clark. Sacagawea had another baby, a girl called Lisette.

Sacagawea is believed to have died in 1812 near Fort Manuel in South Dakota. Her children were left in the care of her husband. Her son Jean-Baptiste went on to study in Europe and became a fur merchant like his father. Little is known of Lisette.

Sacagawea was the only woman in the Lewis and Clark team. Despite her situation, she proved to be a vital pillar in the expedition. Her linguistic and geographical skills made the expedition safe and successful. With no formal military training, Sacagawea proved her native skills were superior in the wilderness.

The Bird Woman of the expedition was honored by the US government. Her portrait was inscribed on the golden dollar coin centuries after her death. Other institutions of learning, recreational centers, and even a postage stamp bear her portrait and name.