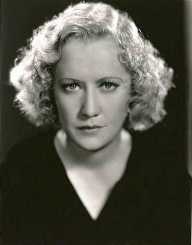 Miriam Hopkins was an American actress who is best known for her feud with fellow actress Bette Davis.

Miriam Hopkins was born on 18 October 1902 in Savannah, Georgia. Her parents were Ellen Cutter and Homer Hopkins. She also had a sister named Ruby. When Hopkins was seven, she lived briefly in Mexico. Her parents divorced while Hopkins was just a teenager and she moved with her mother and sister to New York. Hopkins was a student at Goddard College in Vermont before going to Syracuse University. Hopkins had little to no contact with her father and left his name on official documents.

Hopkins began performing on stage professionally at the age of twenty. She worked as a chorus girl in Broadway musicals. Slowly she advanced to dramatic stage roles and in 1930 landed a contract with Paramount Pictures. Hopkins screen debut was in the romantic comedy, Fast and Loose. Hopkins then landed a major role as the female alongside Maurice Chevalier, who was Paramount Pictures’ leading man, in the Smiling Lieutenant. The film was also Hopkins first film with director Ernst Lubitsch. This was followed up with a critically praised performance in the successful 1931 film, Dr. Jekyll, and Mr. Hyde.

Hopkins then teamed up with Lubitsch in Trouble in Paradise. The film was a critical hit, but a commercial failure. The film saw Hopkins in particular singled out for praise. Although the start of Hopkins career coincided with the era before there was a censorship code in Hollywood, her roles were considered controversial. Her film, The Story of Temple Drake, contained a rape scene and Design for Living, a film also starring Hopkins, featured a ménage trios. In 1935, Hopkins received an Academy Award for her performance in the title role of, Becky Sharp. The film was particularly notable for being the first feature film to use three bit Technicolor.

Hopkins auditioned for the lead role in the upcoming film, Gone with the Wind, although she was, like the character, from Georgia she missed out on the role to Vivien Leigh. Two other notable films from Hopkins were The Old Maid and Old Acquaintance. The films caught the public’s imagination due to the rivalry and hostility between Hopkins and her co-star Bette Davis. Hopkins and Davis were often portrayed in the media as being at each other’s throats. It was true that Hopkins was deeply jealous of Davis and that neither star enjoyed working with each other. However, they did both acknowledge each other’s talent.

Hopkins film output declined after Old Acquaintance and did not make another film for six years after its release. Her 1949 return in The Heiress was rewarded with a Golden Globe nomination. Hopkins also began making television appearances in 1949. That year she appeared on The Chevrolet Tele-Theatre program. Hopkins made her final TV appearance in 1969 on The Flying Nun. Her last film appearance was in the 1970 film, Savage Intruder.