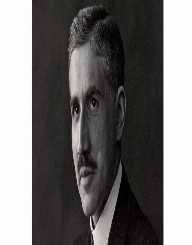 Archibald Hill was born on September 26, 1886. He was an English physiologist. In 1992, he received the Nobel Prize in Medicine for his discovery relating to the production of heat in the muscle. He dedicated his life to muscle physiology.

Archibald Hill was born on September 26, 1886, in Bristol in England. He attended Blundell’s School. He later enrolled at the Trinity College in Cambridge where he studied mathematics. He then started pursuing physiology.

In 1909, Archibald Hill began researching physiology and also published a paper on the history of receptor theory in the same year. He used the Blix apparatus to conduct experiments on the heat production of contracting muscles. Through his research, he came up with the physics of nerve and muscles. In 1910, he received a fellowship at Trinity College. In 1914, he became a University lecturer in Physical Chemistry at Cambridge. During the First World War, he served as a captain and Brevet major. After the war, he went back to Cambridge where he began his research on the physiology of muscles.

In 1920, Archibald Hill became the Chairman of the Physiology at the Victoria University of Manchester. He later discovered the production of heat in the muscle. In 1923, he became the Jodrell Professor of Physiology at the University College of London. In 1926, he became the Foulerton Research Professor of the Royal Society. He was also in charge of the biophysics laboratory at University College. He penned books such as ‘Living Machinery’, ‘The Ethical Dilemma of Science and Other Writings’ and ‘Muscular Activity’ among other publications.

In 1918, Archibald Hill became a Fellow of the Royal Society. He was also honored with the Officer of the Order of the British Empire. In 1922, he received the Nobel Prize in Physiology or Medicine jointly with Otto Fritz Meyerhof. In 1947, he was awarded the Medal of Freedom with Silver Palm. In 1948, he was awarded the Copley Medal of the Royal Society. In 1952, he became the President of the British Association.

In 1913, Archibald Hill married Margaret Keynes with whom he had four children, Polly, David, Maurice, and Janet. He died on June 3, 1977, in Cambridge in England.