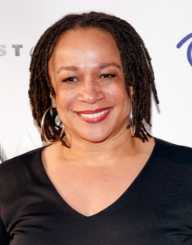 Epatha Merkerson is an award-winning actress best remembered for her role in Law and Order, a movie she featured for 17 years. Among other films, Merkerson starred in are Lackawanna Blues and Lincoln which showed in 2005 and 2012 respectively.

Epatha Merkerson was born on 28th November 1952 in Michigan in the United States of America. She grew up under the care of her mother who worked in the postal service. Her parents had divorced when she was just five.

Together with her five other siblings and their mother, they lived in Detroit. It was an ethnically diverse neighborhood. Her early life was influenced mainly by her mother who was known to be a hard working lady.

Epatha Merkerson attended Cooley High School and graduated in 1970. After that, she enrolled at Eastern Michigan University. She majored in dance before transferring to Indiana University, Bloomington.

In 1976, Merkerson attained her degree in Bachelor of Fine Arts at Wayne State University. Also, she was awarded her first Honorary Doctor of Humane Letters by the same university.

After that, the University of Maryland Eastern and Montclair State University recognized her work and awarded her an honorary doctorate in 2012 and 2013 respectively.

Epatha Merkerson started showing her talent at an early age. She was involved in school acts both in primary and secondary level. While in the University of Eastern Michigan University, she discovered she wanted to be an actor after attending a drama class.

Two years after completing her education, she moved to New York to pursue her dream of becoming an actor.  After that, she made her television debut in 1986 in the movie Pee-wee's Playhouse.

Some of her other early roles in the television include She's Gotta Have It, where she starred as Spike Lee and Jacob's Ladder as Elsa. Both shows showed in 1990.

Merkerson made her name in the acting industry between 1990 and 1993. During those years, she featured in Navy Seals, Equal Justice, and Loose Cannons before making a short guest appearance in the movie Law & Order.

Epatha Merkerson's stars rose rapidly after taking on a role in the movie Lady Day at Emerson's Bar and Grill where she had taken a lead role. The part won her a nomination in Tony Awards.

In the movie, she went through countless challenges to keep her integrity check. The show lasted 17 years. It was, however, canceled since Lieutenant Van Buren which was her character had been diagnosed with cancer.

Epatha Merkerson married Toussaint L. Jones in 1994. The couple, however, divorced in 2006. Throughout her life, she has advocated against smoking.

Epatha Merkerson received Obie Award in 1992 for her role in the movie I'm Not Stupid. She also received Regulus Award in 1999 in her lead movie Resident Play.