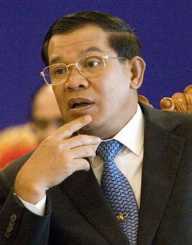 Hun Sen was born on August 5, 1952. He is a Cambodian Politician. He is the current Prime Minister of Cambodia. He is also the thirty fourth Prime Minister to the state. He is one of the longest serving leaders in the world.

Hun Sen was born Hun Bunal on August 5, 1952, in Kampong Cham, Cambodia. He was born to Hun Neang and Dee Yon who were poor farmers. He was brought up alongside six siblings. He attended a local primary school. He also worked in agriculture. In 1965, he moved from home and attended a Buddhist monastic school located in Phnom Penh. In 1969, he dropped out of school to join Khmer Rouge. In 1998, his mother died due to illness. His father later died in 2013 due to ill health.

In 1970, Hun Sen joined the Khmer Rouge and was appointed platoon leader. The following year he became a member of the Communist Party of Kampuchea Youth League. In 1975, he lost his eye while fighting in the battle for Phnom Penh. In 1977, he fled to Vietnam together with other leaders after there grew a rift with ‘Pol Pot.’ In 1979, he was appointed the Foreign Minister in the Vietnamese People’s Republic of Kampuchea or the State of Cambodia. In 1985, he was made the chairman of the Council of Ministers and later the Prime Minister.

In 2008, Hun Sen was re-elected as Prime Minister during the general elections. In 2013, he made a declaration that he would rule Cambodia until he reached the age of seventy four. His declaration led to peaceful demonstrations in Phnom Penh as the opposition party claimed that the 2008 elections were not fair. Hun was condemned by the United Nations for using his position to dissipate protestors who were demonstrating peacefully.

In 1996, Hun Sen was awarded the World Peace Award by the World Peace Academy for his efforts to end the Cambodian Vietnamese War during the 1991 Paris Peace Talks. He was also bestowed with the titles of Human Cultural Asset, Roving Ambassador for peace and World Peace Congressman. In 2005, he received the U Thant Peace Award from the Sri Chinmoy Centres International.

In 1975, Hun Sen married Bun Rany with whom he has six children. He had an affair with actress Piseth Peaklica who died in 1999 after being assassinated. Hun has been accused by Amnesty International for torturing political prisoners with iron bars and electric shocks. Hun does not like talking about his wealth to the public.