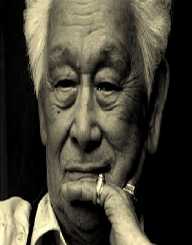 Pham Duy is a singer and songwriter from Vietnam.  His work covers many genres and tells stories of his homeland.

Pham Duy was born on October 5, 1921, in Hanoi, Vietnam.  His full name at birth was Pham Duy C?n.  Pham Duy was the youngest of five children and raised by his mother, Nguy?n Th? Hòa.

His father Pham Duy was a famous journalist who died when Pham Duy was two years old.  His eldest brother, Ph?m Duy Khiêm, helped raise him.   Khiêm was a writer and the country's ambassador to France.

Pham Duy attended the College of Arts in Vietnam to study music. Pham Duy also attended Ky Nghe Thuc Hanh Vocational College.  He lived in France for a while and studied music under Robert Lopez from 1954 to 1955.

During his time in Paris, Pham Duy also attended courses at the Institut de Musicologie though he was not actually a registered student.

Pham Duy started his singing and songwriting career during the French occupation of Vietnam.  In 1943, Pham Duy started singing with the musical group Duc Huy.  Pham Duy was also a part of the musical team for the nationalist organization called 'Vi?t Minh.  Some of his earliest work was produced during that time.

After he returned from his studies in Paris, Pham Duy lived in Saigon.  However, he was not allowed to release his music to the public nor perform it before an audience.  When the Vietnam War ended in 1975, it was the start of the Communist government.

Pham Duy and his family went to the United States and stayed there for almost 30 years.  During that time, Pham Duy wrote songs that were prohibited in Vietnam.  Still, they were recognized by many people in his country. Many of the hundreds of songs fell into categories or periods such as folk songs, resistance songs, refugees songs, heart songs, children's songs, and even spiritual songs, to name a few.

Pham Duy went to visit Vietnam in 2000 after being gone for 25 years.  Pham Duy returned to his native country for good in 2005.  During that time, the Vietnam communist government removed the ban on his songs.

After returning to Vietnam, Pham Duy went on tour and performed many concerts and events.

Pham Duy married fellow singer Thái H?ng.  The couple had eight children.  The entire family made their mark in the world of music.  Pham Duy and his wife remained together until her death from lung cancer in 1999. Pham Duy died on January 27, 2013, in Ho Chi Minh City at the age of 91. Pham Duy was buried at Binh Duong Park Cemetery along with other famous Vietnamese.

Pham Duy would be remembered for the poetry of his lyrics and the historical relevance to the songs to many periods of changing political climate of Vietnam.  He has been considered one of Vietnam's most important musicians and voices of the modern era.

Pham Duy suffered from gout.  He also had heart and liver disease.  All of these things contributed to his death.

At one point, his songs were banned by his country because of the patriotic, anti-communist lyrics that opposed the government.  For this reason, Pham Duy lived in exile in the United States.  While Pham Duy could not perform these national songs in his native Vietnam, they were performed in other parts of the world.