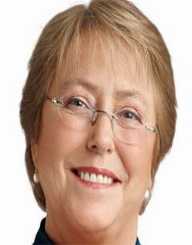 Michelle Bachelet is known for serving Chile as the first female President. She was elected in 2006 for a term and hailed again in the same position for a second term in 2014. She is also an accomplished physician-surgeon who was appointed as Minister of Health on March 11, 2000, and also served as the first executive director of the United Nations Entity for Gender Equality and the Empowerment of Women or just known as UN Women from 2010 to 2013.

Bachelet was appointed on January 7, 2002, as Chile’s Minister of National Defense, is the first woman nominated for this role in a Latin American country.

Michelle Bachelet married her husband Jorge Leopoldo Dávalos Cartes in 1977 and gave birth to two of his children. Her first child was born the following year in 1978 and named him Jorge Albero Sebastián followed by her second child in 1984 named Francisca Valentina. The same year Valentina was born, the couple officially separated.

During the 1990s, she became involved with Aníbal Hernán Henríquez while she was working for the National AIDS Commission. Their involvement brought forth her third daughter born in 1992 named Sofiá Catalina. Bachelet and  Henríquez separated a few years after the birth of her third child in the early 1990s.

Michelle Bachelet was born on September 29, 1951, as Verónica Michelle Bachelet Jeria in La Cisterna, Santiago. Her parents were Ángela Jeria Gómez and Alberto Bachelet Martinez. Her mother worked as an archaeologist while her father served as Brigadier General at the Air Force respectively.

With a father working in the military, the family often relocated to different areas depending on his military base designation. As a result, the young Bachelet spent her childhood growing up in different places. For her early education, she attended Quintero, Antofagasta and in San Bernardo. Her father was then relocated to the US where he worked at Washington DC's Chilean Embassy. She learned how to speak English eloquently when she attended Western Junior High School located in Maryland.

In 1964, Michelle Bachelet and her family returned to Chile, and she continued her education by attending an executive all-girls public school called  Liceo N? 1 Javiera Carrera where she graduated with honors in 1969. The following year in 1970, she enrolled at University of Chile and opted to take a degree in medicine upon her father's suggestion.

Bachelet also studied at the National Academy of Political and Strategic Studies wherein the focus of her studies is military strategy and ranked first place in class. She was offered a presidential scholarship for this feat and continued to study at the Inter-American Defense College in Washington with a course in Continental Defense which she finished in 1998.