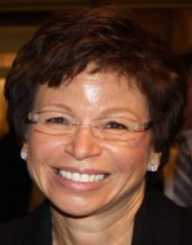 Valerie Jarrett was born on November 14, 1956. She is a lawyer and a businesswoman. She is also a senior White House officer. She started her career as a corporate and real estate lawyer before venturing into politics.

Valerie Jarrett was born as Valerie June Bowman Jarrett on November 14, 1956, in Shiraz in Iran. She was born to James E. Bowman and Barbara Taylor Bowman. Her father was a pathologist and geneticist while her mother was a childhood development expert. Her family travelled a lot because her father assisted in developing countries in setting up health care systems. The development was a part of the United States aid program. In 1961, her family moved to London. In 1963, her family moved to Chicago and settled in Hyde Park Neighbourhood.

In 1974, Valerie Jarrett graduated high school from Northfield Mount Hermon School. In 1978, she graduated from Stanford University with a Bachelor’s Degree in Psychology. In 1981, she obtained her Juris Doctorate in law from the University of Michigan Law School.

After graduation, Valerie Jarrett began practicing law at a private firm in Chicago. She practiced law until 1987 when her daughter was born. In 1987, she ventured into politics.  She was appointed Deputy Corporation Counsel for Finance and Development under Mayor Harold Washington. In 1991, Mayor Harold died, but she continued to work under Mayor Richard Daley as Deputy Chief of Staff. In 1995, her job under Daley ended, and she began working with The Habitat Company which dealt with real estate development and management. She later became the CEO and President of the company.

In 1995, Valerie Jarrett became the Chairperson of the Transit Authority. In 2004, she became the chair lady of the board of Chicago Stock Exchange. In the same year, she started associating with Barrack Obama when she worked as the finance chair for his senate campaign. She later became the treasurer of Obama’s political action committee. In 2008, she became the co-chairperson of the Obama-Biden Presidential Transition Team.

Valerie Jarrett also served as the chairlady of the University of Chicago Medical Centre’s Board of Trustees. She was the vice chairperson of the University of Chicago’s board of Trustees. She also served as a trustee of Chicago’s Museum of Science and Industry. She was also the chairlady of the White House of Olympic, Paralympics and Youth Sport and the White House on Women and Girls.

In 1983, Valerie Jarrett got married to William Robert Jarrett with who she had a daughter, Laura. In 1987, they separated and divorced in 1988. She has a net worth of nearly $13 million.