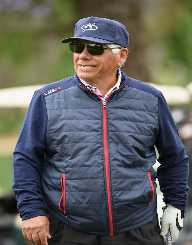 There are many well-noted golfers throughout the history of the game. In this article, we are going to discuss the life of a well-noted golfer extraordinaire, Lee Trevino. From humble beginnings to well-deserved retired life. Lee Trevino has lived a good life enjoying the sport of golf. At the age of 77, he is enjoying his retirement. In his career in golf, he has gone against some well-noted legends such as Arnold Palmer and Jack Nicklaus.

On December 1, 1939, Lee Buck Trevino was born to a Mexican American couple, Juanita and Joseph Trevino in Garland Texas right in Dallas. When Lee was just a little one, Joseph left his mother and grandmother raised the family and Lee. Around the age of 5, Lee began to work in cotton fields to help his family make money to live. Their home didn’t have indoor plumbing or electricity. They lived a poor life.


Introduction To The Sport Of Golf

Lee Trevino was introduced to golf by an uncle who gave him some extra golf balls and a golf club. This gave him an interest in the sport. By the age of 8 years old, he discovered that money could be made by playing golf. He got a part-time job as a caddy at an athletic club. When he became a teen, he quit school in the 8th grade and got a job on a driving range. On his free time, he would practice the game learning on his own. He developed the habit of hitting at least 300 balls after work.

Life In The Military

At the age of 17, Lee Trevino joined the Marine Corps as a machine gunner. During this time he would play golf with the corps officers. Four years later he was discharged in December of 1960. He had achieved the status of corporal when he was discharged.

The Beginning Of His Golf Career

In 1960, Lee Trevino began his golf career professionally. He spent those early years as an assistant in country clubs and would make extra money by hustling people who did not realize the depth of his knowledge and in his abilities at golf because he had been self-taught and had an unusual golf swing.

In 1967, Lee began entering the PGA tours and finished in fifth place at the US Open of that year. Lee finished the year as the tour’s top rookie. In 1968 he again entered the US open. And this time he came out of it with his first championship. He was nicknamed “Merry Max” and “Super Max” by his fans. This was because he liked bringing some fun in such a stuffy game as golf. He once even threw a rubber snake right before the 18th hole during the 1971 US open championship.

By 1971, during his second US Open, Lee Trevino became the first player to win the US, British, and the Canadian Open Championships all in the same year. He did this all within a twenty-day span. This is what named him PGA player of the year that year. Then in 1975 during the western open he was struck by lightning and continued to play anyways. But in the end, he eventually had to have back surgery due to back pain.

Lee Trevino was inducted into the golf hall of fame in 1981 due to all his many accomplishments during these past years in the game.

Reaching The End Of His Career

During the PGA championship in 1984, Lee Trevino pulled off his final win. This win was added to his total of 29 PGA tour wins six major championships and 89 professional wins. He had also won 5 Vardon Trophies throughout his career for having the lowest average score in a season. This is an impressive feat in the game of golf.

On an exciting note, Lee was also in the movie of Happy Gilmore with Adam Sandler as himself. Happy Gilmore was a failed hockey player that ended up playing golf throughout the movie.

Lee Trevino has devoted many years to his philanthropic efforts. He cares about the children of St. Jude’s Children Research Hospital and has contributed to their efforts. He is also on the president’s council on physical fitness and sports. The national multiple sclerosis society sports committee is also another committee that he is on. He was named the recipient of the PGA distinguished service award in 2013.

His One Regret In His Career

Over his career, Lee Trevino has only participated in the Master's tournament twice. He had said that both times he didn’t care for the course and then promptly refused to do any more of these matches. Later in life, he has since regretted these actions. Of his two times at the masters, he finished in a tie for a 10th place each time. This was in 1975 and again in 1985.

About His Golf Career

During the life of his career, Lee Trevino has amassed quite a fortune. He is known to have a net worth of 40 million dollars as of today. This just goes to show that golf can be a very lucrative sport when done correctly. In 1970, he brought in $157,037 as the leading money winner of the PGA tour. That is quite a good amount of money during a tour in that time.

This just goes to show that like all sports you can have a lucrative career while having fun. You don’t need to start out with a lot of money to start a career in a sport. Lee Trevino was dirt poor when he began learning the game of golf. Then he got a job in a golf resort and even self-taught himself. So you don’t have to pay a lot of money for the best equipment and the best trainers. Just start slowly and work your way to the top. This is exactly what Lee has done during his life.

Even while having a family, Lee Trevino never gave up on his dream and his passion for the game. Some would say that with having a family, you have to give up on your passions in life. But Lee Trevino has shown that this is just not the case. Sometimes you may have to get creative to accomplish those dreams and goals.

So when you start to get discouraged and want to give up just look at this man. Look at how he started off in a dirt low-income family and lack of major schooling in his life. See how Lee Trevino overcame those odds and accomplished a very good life. He has also helped this country with his philanthropic and civic endeavors. So always remember you can always be like him and do good all while doing things that you love doing. And have fun while you do it.