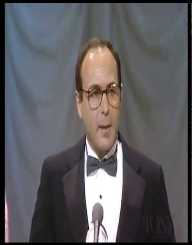 Playwright and stage director James Lapine was born on the 10 January 1949 in Mansfield, Ohio to Lillian and David Lapine. The family relocated to Stamford, Connecticut when he was a youth.

James Lapine was a student at Franklin & Marshall College, a private co-educational liberal arts college in Lancester, Pennsylvania (1971). He then enrolled at the California Institute of the Arts where he studied graphic design and photograph (1973).

Once he had finished his studies, James Lapine relocated to New York City where he worked as a photographer and graphic artist. He was offered a job teaching graphic design at the Yale School of Drama. During his time at Yale University, he adapted and directed Photograph, Gertrude Stein’s play. In 1977, Photograph was produced at the Open Space theatre in SoHo. During the late 1970s and early 1980s, Lapine produced a number of Off-Broadway plays and musicals. In 1981, March of the Falsettos, which was directed by William Finn, won the Outer Critics Circle Award for Best Off-Broadway Play.

James Lapine co-wrote the musical Sunday in the Park With George with Stephen Sondheim in 1982. The play appeared Off-Broadway in 1983, moving to Broadway in 1974. The duo then wrote another musical, Into the Woods which premiered on Broadway (1987). The musical was a success and won Lapine his first Tony Award as well as a Drama Best Award for Best Book of a Musical.

James Lapine and William Finn collaborated in 1992 on the Broadway musical, Falsettos. In 1998 they had an Off-Broadway production, A New Brain. And in 2005, Lapine directed Finn’s musical The 25 Annual Putnam County Spelling Bee. In 2011, they worked together on Little Miss Sunshine, which debuted at the La Jolla Playhouse in California.

Plays James Lapine worked on include Dirty Blonde (2000), which was on Broadway and Off-Broadway; a revival on Broadway of Annie (2012) and Act One (2012). Films include Impromptu (1991) which starred Hugh Grant and Judy Davids; Life With Mikey; Passion, a television adaption (1993) featuring the original cast from the Broadway production.

He also directed Earthly Possessions starring Susan Sarandon; a film based on a novel by Anne Tyler (1999). He wrote the screenplay for the film adaptation of Into the Woods (2014) and in 2016, wrote and directed Custody. He also directed the television documentary Six by Sondheim (2016).

Early in his career, James Lapine won an Obie award for his production of Photograph (1977). He went on to win numerous awards including a 1985 Pulitzer Prize for Drama for Sunday in the Park With George. Passion, the musical won the London Evening Standard Theatre Award for Best Musical (1996).

James Lapine is married to Sarah Kernochan, a screenwriter. They have a daughter, Phoebe Lapine.