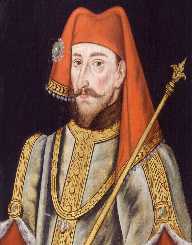 Henry IV of England's father, John of Gaunt, was the fourth son of Edward III. His mother, Blanche, was the heiress to the Lancaster estates. Henry would be the first King of England since the Norman Conquest, whose native tongue was English.

As a young boy, his close friend was Richard Bordeaux, who would become King Richard II of England.

In 1377, bothHenry IV of England and Richard were admitted to the Order of the Garter. On 16 July of that same year, Richard was crowned king at just ten years of age.

Henry IV of England’s father, John of Gaunt, played a significant role in the managing of Richard II’s affairs. In 1386, he left for an expedition to Spain. While he was gone, in 1387, there was a rebellion by the Lords of Appellants, which Henry was part of. When Richard II regained power, he punished all the rebellious barons except for Henry. Over the following years, between 1390 and 1393, Henry IV of England went on crusades but didn’t have much success.

In 1398, Henry IV of England was exiled by Richard II because of an argument he had with Thomas de Mowbray. Mowbray was the 1st Duke of Norfolk. Mowbray was also exiled, for life. Henry went to stay in Paris, where he remained until 1399, at which time he returned to England.


Ascension To The Throne

Henry IV of England's father, Gaunt, died suddenly in February of 1399. King Richard II cancelled the grants to stop Henry from inheriting his father’s property. Henry IV of England contacted the former Archbishop of Canterbury, Thomas Arundel, but Arundel had been part of the rebellion and had been stripped of all power as punishment.

Although he didn’t have official power, Arundel was still able to provide guidance for Henry. With Arundel’s help, Henry IV of England returned to England in June 1399, while King Richard II was away in Ireland. As the king had most of his knights with him, Henry wasn’t met with any resistance.

Henry IV of England went about getting the support of other nobles who weren’t happy with the king. Even the Duke of York, who was looking after England in the king’s absence, gave his support to Henry. It wasn’t long before Henry had the power to declare himself king.

In August 1399, Henry IV of England sent the Earl of Northumberland to negotiate with the king on his behalf. The king agreed to abdicate if Henry IV of England would spare his life. Although this was agreed to, King Richard II spent the rest of his life locked in the Tower of London, where he eventually died under questionable circumstances.

Henry IV of England ascended the throne on 30th September 1399. During his years as the Monarch, Henry IV of England had to stamp out many rebellions. From 1401 to 1406, King Henry IV was accused time and again by parliament of mismanaging the money. Eventually, they took control of the royal expenditure.

Henry IV of England became ill, and in 1412, his son, Prince Henry, took over the management of the administration. The pair didn’t get on very well. The king died in 1413.

His second wife was Joanna of Navarre, whom he married in February 1403. She was the daughter of the King of Navarre. Although Joanna had children from her previous marriage, she didn’t have any children with Henry.