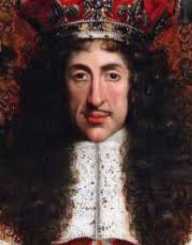 Charles was born in Westminster, London, on May 29, 1630. His father was King Charles I and his mother was Henrietta Maria. He was their eldest surviving son. He had two brothers, named James and Henry, and a sister named Henrietta. His uncle was the French king Louis XIII, and his grandmother came from the Italian House of Medici.

He received the titles of Duke of Cornwall, Duke of Rothesay, and Prince of Wales. As a teenager, he fought in a few battles during the English Civil War. He then moved around Europe for a few years to escape the war.

Charles I was executed in 1649 when England became a republic. Soon after, the Scottish government appointed Charles II as king of Scotland. The title was taken away from him in 1651, and he had to go into exile. He started making plans to turn England into a monarchy again. He gathered the support of Spain, he created his army, and he collaborated with other English men who shared his ideals.

The monarchy was restored in 1660, making Charles II the king of England, Scotland, and Ireland. He worked hard to improve the trade of the country. He gave more independence to the East India Trading Company. He supported the Triple Alliance, and he signed the Treaty of Dover. He had to deal with the crisis from the Great Plague and the Great Fire.

He started the Third Anglo-Dutch War, which lasted from 1672 to 1674. He frequently clashed with the English parliament over the treatment of Catholics. He demanded that they have more freedom, and he wrote the Royal Declaration of Indulgence. He was involved with the Royal Society, and he founded the Royal Observatory.

In 1662, Charles II married Catherine of Braganza, the daughter of the Portuguese king John IV. He married her because of the trading deals he needed with Portugal. They had no children, as she suffered from many miscarriages and stillbirths.

Charles II had many mistresses, including Barbara Villiers, Nell Gwynn, and others. He had over a dozen illegitimate children with them. Prince William and Prince Harry are his descendants through their mother, Princess Diana.

Charles II died from internal bleeding on February 6, 1685, at Whitehall Palace. He was 54 years old. He was buried at Westminster Abbey on February 14. His brother James succeeded the throne.