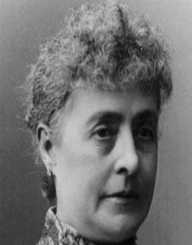 Caroline Harrison was the First Lady of the United States from 1889 to 1892.

Caroline Lavinia Scott was born in the city of Oxford, Ohio, on October 1, 1832. She was one of the five children of John Witherspoon Scott and Mary Potts Neal. Her father served as a Presbyterian minister and as a professor of science and mathematics. She studied English literature, painting, theater, and art, at the Oxford Female Institute. In 1952, she graduated with a degree in music.

One of her father’s students at Farmer’s College was a young man named Benjamin Harrison. He and Caroline Harrison met and fell in love. They got engaged in 1952. They got married on October 20, 1853, with her father being the officiating minister.

The first few years of their marriage were quite hard. They had to spend a lot of time apart. They first moved to the city of Indianapolis, Indiana. Caroline gave birth to their son Russell in 1854. She decided to move back home with her parents because she needed her mother’s help for the baby. At the same time, her husband was busy working on his newly established law practice. She gave birth to their daughter Mary in 1858.

Both of them became active in the civil war. Benjamin went off to fight. He was first commissioned as a second lieutenant, and later as a colonel. Caroline Harrison joined groups that tried to gather supplies and help wounded soldiers, such as the Ladies Sanitary Committee and the Ladies Patriotic Association.

After the Civil War, Benjamin started focusing on politics. He ran for governor of Indiana in 1876, but he did not win. In 1881, he was elected in the United States Senate. The entire family moved to Washington D. C. Caroline Harrison got involved in many social events and charities in the city.

Benjamin Harrison became the twenty-third President of the United States in 1888. Caroline Harrison became the First Lady. At the time, many of her relatives came to live with her and her husband at the White House. She dedicated her time to its renovation. She lobbied Congress to build additional rooms, but she was not successful. Still, she managed to add plenty of improvements. She had electricity added, the plumbing repaired, the walls repainted, the insects wiped out. She was known for the elegant dinners and receptions she hosted. She also started the tradition of Christmas trees in the White House.

Caroline also helped with different social causes. She helped raise the needed money for the founding of Johns Hopkins University, a medical school. She had one request – she wanted the school to admit female students as well. She also took part in the founding of the National Society of the Daughters of the American Revolution. That was an organization for the female descendants of the people who helped the United States achieve its independence.

Caroline Harrison was diagnosed with tuberculosis in 1891. She passed away on October 25, 1892, at the age of 60. A service was held for her at the White House. She was then buried in Indianapolis. After her death, her daughter Mary became the de facto First Lady of Benjamin Harrison.