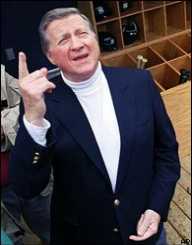 George Steinbrenner aka The Boss was the longest-tenured principal of a baseball team called the New York Yankees. For over three decades, he showed his leadership skills till his demise in 2010.The renowned baseball team is now micromanaged by his two brothers, Hank and Hal Steinbrenner. Brian McGuire also serves as an executive of the said company. During George’s tenure, the team garnered six World Series Championships.

Early in 1973, Steinbrenner ventured into business, which it became his, most favored line of the field. The same year he co-joined with other investors that came to purchase the New York Yankees team for CBS television network. During this time, the group experienced several mishaps. Since its inception, the club didn’t manage to touch the World Series finals. But by the end of 2002, George and other stakeholders brought back its fame. To date, the possessor, Yankee Global Enterprises, and George’s family are more than happy to have brought back its recognition.

On July 4, 1930, George Michael Steinbrenner was born in Ohio; the U.S. He was born to a Christians scientist, Rita and an authoritarian, Henry. Stein’s mother helped his son to solve his teenage issues. In other words, he was closer to his protective mother, but his father dominated his life. Henry despised failure in his family, so he pushed them further for them to have a prosperous future. His father also got a chance to work for Massachusetts Institute of Technology. It was here that he embraced the spirit of hard work that he brought it back to his family.

Luckily, they had a promising life as well as middle-level lifestyle. This was in regards to his work at Kinsman Marine Transit Company. Henry didn’t give George any penny; instead, he paid him according to his hard work. For instance, he used to sell eggs at the age of nine that gave him an idea of coming up with his own company called George Company. After five years, the business was renamed as S & J Company which he left for his elder sister Judy to govern.

Early in 1944, George joined Culver Military Academy, and after graduation, he entered Williams College. He was a guru when it came to entrepreneurship, but he was an average student when it came to his studies. It was here that he opted to follow his father’s line of duty of being a track star. In the process, he landed a job at one of the editing company, but he didn’t neglect his studies. In 1952 Steinbrenner received his bachelor degree in English. After graduation, he went to serve as a second Lieutenant at the Ohio Air Force Base. It was here that he took a chance of leading different sports programs. He also came up with his own coffee business that gave birth to 6 trucks.

In 1954 George was discharged from his military position where he attended Ohio State University. After a year he graduated with master’s degree in physical education. While still there, he became an assistant coach of his favorite University’s team. He also worked for several terms including Purdue and Northwestern University. But he later returned to his native home due to his father’s instructions. George went to work at his family’s business.

In the mid of 1960, George went against his father’s wish where he purchased a basketball ball team called the Cleveland Pipers. But his investment turned him down in two years’ time due to its sudden collapse. In fact, he lost over $30 million. In the mid of 1967, he bought the American Ship Building Company, where he acted as the president. During his tenure, the company flourished for the better, and it was here that he introduced his services to neighboring countries. After few years, he managed to possess or own the entire business.

George Steinbrenner continued to gain interest in the sports field. His aim was for him to buy the Cleveland Indians baseball team by 1970s. But he failed in the middle, and this is what gave birth to the New York Yankees possession. He brought back the team's name in 1973, all thanks to his business skills. The same year, his dreams were almost cut short due to the use of other investor’s funds as well as faking employee’s bonuses. He also gave a share of the company’s money to a political leader Richard Nixon in the course of his campaign. For this reason, he was fined $20,000 where he later tasted severe punishments of being out of the baseball team for over a year.

George came back in 1976 where he helped the Yankees to taste the fruit of their hard Labour. Since 1964 the team managed to win their first pennant. He then introduced several players such as Ken Griffey and Tommy John.

In the mid of 1930, George Steinbrenner was banned from the baseball team for funding one of his team members foundation, Winfield. That was not even the case. They came to fight for the possession of the said organization which led to his end of rulership. He later returned in 1993, but he opted to leave the management to other investors. At the beginning of 2006, he spent most of his life in Florida with his dearest wife: Joan. George suffered a heart attack where he breathed his last in the mid of July 2010. In spite of his controversial kind of leadership, his reputation is still up to the mark. Eventually, his long speeches during the training of his team and disciplinary nature paid off. Such was this man who once lived in our midst.