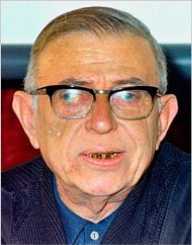 French existentialist philosopher, intellectual and writer Jean-Paul Sartre was born in Paris, France in 1905. His parents were Jean-Baptiste Sartre and Anne-Marie Schweitzer. He was their only child. Sartre’s father died when he was very young, and his mother raised him with the assistance of his maternal grandfather Carl Schweitzer, an uncle of Albert Schweitzer.

Jean-Paul Sartre was a student at the Ecole Normale Superieure (1924-1929). In 1931 he was appointed a professor of philosophy at Le Havre. Then in 1932, a was awarded a grant to study in Berlin which enabled him to concentrate on the work of the philosophers Edmund Husserl and Martin Heidegger.

After returning from Berlin, Sartre resumed teaching at Le Havre, and later he moved to the Lycee Pasteur in Paris (1937-1939) before resigning to work as an independent writer.

Sartre was awarded the Nobel Prize for Literature 1964 for his autobiography Les Mots. He refused the prize.

Sartre main philosophical work is Being and Nothingness (1943). Other work includes his essay Existentialism as a Humanism (1946) and a series of novels: The Road to Freedom (1945-1949), The Flies (1943) and No Exit. As a literary critic, he produced works on Baudelaire (1947) and Jean Genet (1952) and also wrote an autobiography entitled Les Mots (1963). Sartre wrote a four-volume study of Gustave Flaubert which was published in 1971. In 1977 he released.

Sartre was a left-wing activist who was an admirer of the Soviet Union though not a member of the Communist Party. After carrying out a critical study of Marxism practiced in the Soviet Union, he concluded that it was not a viable system to live under, although he still believed in Marxism in its pure form.

Sartre was active in the French Resistance movement during World War II. In 1960 he was vocal in his concern about the Vietnam War. By the mid to late 1970s, he considered a political outsider on the extreme left. In 1977 Sartre expressed concern about the trend of Eurocommunism and was critical of the Italian Communist Party. During his final years, he continued to address social and political issues.

In is essay Self-Portrait at 70, Sartre discussed his carelessness with money, his love of music and how encroaching blindness forced him to make changes to his life when he could no longer read.

Sartre had a long relationship with the French writer Simone de Beauvoir (b.1909-d.1986).

Towards the end of his life, Sartre became blind. Jean-Paul Sartre died in Paris, France on the 15 April 1980 of edema of the lung.