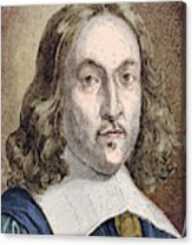 Pierre de Fermat was a lawyer and a mathematician. He was the pioneer of infinitesimal calculus and created  Fermat's Last Theorem and Fermat’s Principle for Light Propagation.

Pierre de Fermat was born Pierre Fermat, on 17 August 1607, although some records say 1607. He was born in Beaumont-de-Lomagne, Gascony in France. His father Dominique Fermat was a leather merchant and a consul of Beaumont-de-Lomagne. His mother Claire de Long hailed from an aristocratic family and died when he was seven years old. Pierre had a brother and two sisters

As de Fermat family is wealthy, Pierre de Fermat was likely to have received extensive education, as he was known to be a multi-linguist who knew classical Greek and Latin, as well as Italian, Spanish, and Occitan.

Pierre de Fermat started studying law in 1623, focusing on civil law at the University of Orléans. He graduated Bachelor of Law at the age of eighteen three years later.

In 1627, Pierre de Fermat became an attorney and moved to Bordeaux. A year later, Dominique passed away, leaving his son a large inheritance.

Despite the inheritance, Pierre de Fermat continued to work and had started researching mathematics, starting with restoration of Apollonius's De Locis Planis and sent it to mathematicians such as Jean de Beaugrand and Étienne d'Espagnet.

Pierre de Fermat paid a sum of money for a senior official of a counselor at the Parlement de Toulouse in 1630, belonging to one of the France High Courts of Judicature.

Pierre de Fermat was sworn in during May 1631, by the Grand Chambre and he remained in office until his retirement. With his new position, Pierre changed his name to Pierre de Fermat, to show his aristocracy.

First, he was promoted to Conseiller aux enquêtes in 1638, Pierre rose again in ranks within four years, owing to his knowledge of languages. He was inducted into the highest council of the parliament; then he was the Grand Chamber.

Being a senior attorney was his real job, but Pierre de Fermat also had an interest in mathematics. As such, he did not publish his work and findings.

Even though his work usually lacks quality proof, Pierre de Fermat managed to make some serious contributions in areas of mathematics such as number theory, calculus, statistics and analytical geometry.

Methodus ad disquirendam maximum et minimum et de tangential linear curvature was published after his death in 1679, after being in circulation for forty years.

Pierre de Fermat engaged Blaise Pascal in 1654, trying to persuade Pascal to help him with a theory of probability, a game of numbers.

Pierre de Fermat studied a lot of number theory, and manage to discover what is now Fermat Numbers and Fermat’s Little Theorem. He wrote his “Last Theorem” in 1637, despite it not being his last, it was one that was found after his death.

The proof of this theorem was published in 1995, three hundred years after it was written, by Andrew Wiles, a professor of mathematics at Princeton University.

Pierre de Fermat Principle and Fermat’s Functional are based on his generalized theory about how light travels, known today as the principle of least time.

Pierre de Fermat observation was the basis of the principle of least action, in the field of physics.

Pierre de Fermat survived the plague but died on 12 of January 12, 1665, at Castres. The cause of his death was unknown, as he was carrying out his duties in the local courthouse. Pierre de Fermat was buried in the Church of St. Dominique in Castres.