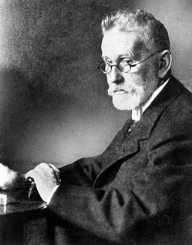 Paul Ehrlich is a well-known scientist in the areas of virology, immunology, and serology. Ehrlich was also a pioneer in the fields of chemotherapy and hematology. His significant works were geared towards making a change using his skills in developing vaccines for diseases such as syphilis and diphtheria. His family was a prominent German Jewish family unit on the outer edge of the Empire. Growing up, he majorly got inspiration to learn more about microscopic life forms from his cousin, who was a professional scientist.

Paul Ehrlich was born at Strehlen, on the Lower side of Silesia, in the German Kingdom of Prussia on March 14, 1854. His father, Ismar Ehrlich was a liquor distiller and pottery collector. His mother was Rosa Ehrlich. Paul attended his secondary school at Breslau and then went to study biology and medicine at several different universities that included: Breslau, Strasbourg, Freiburg, and Leipzig.

All through his childhood, Paul Ehrlich was fascinated by science with a strong bias in microscopic tissue sample staining. He learned and acquired skills in the scientific processes from Karl Weigert, his mother’s nephew

He graduating from esteemed learning institutions, Paul began his career of formal scientific discovery. In his quest to broaden knowledge scope, Paul attended several prominent universities to learn about what microscopes could expose. He developed new analysis methods that are still used today in the course of performing significant research in the fundamental processes of cellular biology.
Paul became the head physician at a prestigious hospital after he graduated with a doctorate in medicine from an elite university. After graduation, he continued to develop his work in the areas of immunology and serology. After nearly giving in to a short period of tuberculosis, Paul started developing several ground-breaking theories that led to the invention of essential vaccines for diseases like syphilis, diphtheria and other immunological illnesses.

As Paul continued with his experiments in cellular staining, he concluded that chemicals could also be used to heal and protect the body at the cellular level. This discovery was a remarkable step forward in the area of scientific thinking. He graduated and was honored with a doctorate in medicine from the University of Leipzig in 1878. After that, he got employed at a major hospital in Berlin as the head physician.
During his time at the hospital, he invented a new way to stain tissue samples that allowed doctors to see and identify the tuberculosis bacillus bacteria for the first time. At the hospital, he also began using methylene blue to treat neurological disorders that his patients suffered from successfully. Ehrlich later came to publish 37 different scientific research papers on the topic of cellular biology between 1879 and 1885. In his last research, he compiled, 'The Requirement of the Organism for Oxygen,' it was regarded as his most magnificent work of research as a scientist describing a vital function of mammalian biology in understanding how cells process oxygen.
After a period of more research and more findings and more studies, he completed his in-house clinical and academic training at the Charite medical school and teaching hospital in Berlin in the year 1886. He then set out to travel to Egypt so that he could continue doing his independent studies in the field of virology. Between the year 1888-1889, Paul suffered a severe case of tuberculosis infection that he contracted in his laboratory. He decided to return to Germany after he healed. Later, he went on to run his small lab and also got practice private medical research.
In 1891, Paul got an opportunity to work for the ‘Berlin Institute of Infectious Diseases.' Together with his fellow scientists, Paul made significant breakthroughs in developing vaccines for diphtheria and tetanus two years later, while still working at the Institute. Their research on diphtheria then led one of his colleagues to win a Nobel Prize in the Medicine category. However, Paul felt like he should have also received the prize considering that he took part in the research process.
With time, the institute he was working with founded a new branch in 1896. It was named ‘The ‘Institute for Serum Research and Testing,' it was purposely in honor of Ehrlich’s. They named him its founding director. In 1899, the institute relocated to Frankfurt-am-Main and was chartered. Within the same year, it got renamed as the Institute of ‘Experimental Therapy.'
Paul continued to perform his research, and in 1897 he came up with his famous side-chain theory that led to remarkable developments in subjects of serology and human immunology. These findings and study later led him to win a Nobel Prize. His work became a worldwide sensation. Gradually, the government became concerned by the way he was using state resources for his research. Due to this in1901, he decided to fundraise for his projects without any disturbances.
In the year 1906, he became the director of ‘The Georg Speyer House Research Foundation’ in Frankfurt. There he developed ‘Salvarsan’ which was the first drug specifically designed to treat syphilis and Paul contributed to its discovery in 1909. In the quest to defend Germany’s foreign policy and militarism, Paul went on to sign the manifesto of the 93 in 1914.

After a long time of research and producing better solutions in the medical area, together with Élie Metchnikoff, Paul Ehrlich won the Nobel Prize. It was in the category of Physiology or Medicine in recognition of his decades in the field of scientific research in 1908.

Paul Ehrlich was awarded many other prominent awards during his lifetime. He also has had in his honor many renowned institutes, streets, parks, bank notes, prizes, lunar craters and other distinctions named after him.

Paul Ehrlich married his wife Hedwig Pinkus in 1883, and together they had two children, Stephanie and Marianne. Paul Ehrlich passed away at the age of 61 on August 20, 1915, in Bad Homburg, Hesse, in Germany. His body was then laid to rest at a Jewish cemetery in Frankfurt-am-Main. His tombstone is up to now a tourist destination.

In 1940, the American government made a training film about Ehrlich's work. However, Nazi Germany declared it as an official secret. In Paul’s honor, the research institute where he did his paramount job and discovered the cure for syphilis in 1947, was renamed Paul Ehrlich Institute in 1947.
Paul was among the leading scientists who came up with the first successful cure for syphilis.

He also took part in developing the drug ‘Arsphenamine’ which was the first ever agent used in chemotherapy; hence he virtually founded the procedure that is now widely utilized in the treatment of cancer and several other diseases. He dedicated his life to finding new knowledge in science and helping his fellow human beings. Paul Ehrlich died from natural causes. The German Emperor and lovers of science around the world lamented his death.