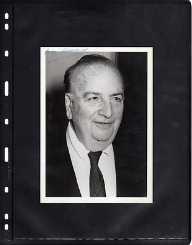 Baruj Benacerraf was born on October 29th, 1920. He was an American immunologist that was originally born in Venezuela. He is famous for being the receiver of the 1980 Nobel Prize in the field of Physiology and Medicine. He was credited with the discovery of a specific type of genes referred to as major histocompatibility complexes. This was an important discovery that would aid in the immune system. Benacerraf’s colleagues that shared with him the Nobel Prize were George Davis Snell and Jean Dausset.

Baruj Benacerraf was born on October 29th, in 1920. His place of birth was in Caracas in Venezuela. His father worked as a textile merchant. His other sibling was also a celebrated philosopher named Paul Benacerraf. Later on in life, he went for his Bachelor of Science degree at the Columbia University School of General Studies. Soon, he enrolled with Medical College of Virginia where he earned his recognition as the Doctor of Medicine.

With time Baruj Benacerraf went for his internship in the New York City to work with the Queens General Hospital. In 1946, he was called to serve in the US Army for two years until 1948. After leaving the army, he went on to work as a researcher at the Columbia University College. Shortly after, he migrated to Paris where he continued with his research. During this time, he worked at the Broussais Hospital in the laboratory belonging to Bernard Halpern. His main area of study was in the immune system’s reticuloendothelial function.

In 1956, he was back in the USA where he researched further on the complexity of the immune system. There are other immunologists that he collaborated with in this research including the likes of Robert McCluskey, Zoltan Ovary, and Lloyd J. Old. Around this time, he had inherited the Colonial Trust Bank from his father, and therefore he spared his time in managing it. Soon, he retired from his bank’s position with the main intention of focusing on his interest in science.

Throughout his science career, Baruj Benacerraf was credited with the important discovery of genes which functioned to control the response of the immune system.

In 1943, Baruj Benacerraf tied the knot with Annette Dreyfus. The two were blessed with a girl child named Beryl Rica Benacerraf.Dreyfus’s wife passed away in mid-2011.