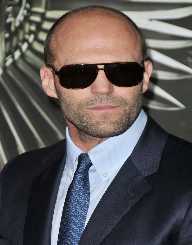 English actor Jason Statham was born on the 26 July 1967 in Shirebrook, Derbyshire to Barry Statham and Eileen Yates.

A talented sportsman, Jason Statham was a member of the National Diving Squad in Britain.

He did various jobs to make ends meet before appearing in some music videos in the early 1990s. He was scouted by Sports Promotions and became a French Connection model, and this led to a film role in Lock, Stock and Two Smoking Barrels (1998).

In 2002, he appeared in Snatch (2000) alongside Brad Pitt and Dennis Farina. Statham then had a role in Ghosts of Mars, and this led to roles in The One, Mean Machine, The Italian Job, and Cellular.  He was in The Transporter (2002 and also in Transporter 2 and Transporter 3.

Statham was married to Kelly Brook between 1997 and 2004. He then married Rosie Huntington-Whiteley in 2010.

Jason Statham is a martial arts expert and often does his own stunts. A football fan, he supports the Nottingham Forest Football Club.