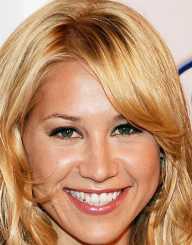 Ann Lee was also known as Joan Boniface Winnifrith. She was born on 2nd of January 1913 in Ightham, Kent, England. Anna was one of the three children that were born to the famous Anglican clergyman at the St. Peters Church. 17 years later on, she enrolled to study dramatics at one of the most famous Schools in The City of London. She learned a lot in the London Central School of Speech Training and Dramatic Art at the London’s Royal Albert Hall. It is here where her future career was molded.

Later on, Anna met George Stafford who became her second husband. George was a pilot during the Second World War. They got married on 8 June 1944, and they were blessed with three sons, John, Stephen and Tim Stafford. Unfortunately, their marriage ended in 1964. Her final marriage was to the great novelist Robert Nathan in (1970). After this extended stay in the US, Anna became a naturalized US citizen under her new name Joanna Boniface Stafford. The marriage lasted for 15 years until her death in (1985).

Anna Lee trained at the Royal Albert Hall where she played many fantastic roles in a series of films in the early 1930s. As time went by, she steadily gained prominence and popularity especially in the wealthy class of people. Later on, she joined the London Repertory Theatre where she got the nickname ‘The British bombshell’ as a result of her work in the famous plays ‘The Constant Nymph’ and 'Jane Eyre.’ In 1933 she starred with Louis Hayward in the famous film of Chelsea life in the Chelsea community in Britain. In 1934 Lee had to sign a contract with Gainsborough Pictures as a result of her strong performances in quota films.

Anna Lee also featured in leading lady roles in a series of diverse genres at Gainsborough. These genres included the famous comedy-thriller “The Camels Are Coming,” “The Passing of the Third Floor Back,” “The Man Who Changed His Mind” and the famous war film “O.H.M.S.” Later on, she also featured in the Jessie Matthews of 1935. In 1937 she starred in one of the studio's largest budget productions film the company had ever accommodated “King Solomon's Mines” which played a significant role in her career.

In the period of the 2nd World War, Lee featured in several movies. These included, the famous ‘Seven Sinners ‘of (1940), the “How Green Was My Valley” of (1941), The “Flying Tigers” of (1942) and the “Hangmen Also Die” of  (1943). Besides, on several occasions, she volunteered to undertake overseas trips with the U.S.O. and she entertained the mighty Allied troops during the war period.

Moreover, in the 1940s and 1950s, Anna Lee was one of the most frequent artists on television anthology series that included “Robert Montgomery Presents,” “The Ford Theatre Hour” and the ‘Wagon Train.' Anna disappeared for a while before returning to the great cinema. She featured in a series of famous movies. For instance, “Gideon of Scotland Yard” of (1958), “The Last Hurrah” of (1958), “Horse Soldiers” of (1959), “Whatever Happened to Baby Jane” of (1962), “7 Women” of (1966) among many others.

Despite her old age, Anna Lee still managed to feature in the great “Lila Quartermaine” in the popular ABC drama where she starred in until 2003 when her health started deteriorating. Her health became even worse, forcing her to throw in the towel.

One of her most excellent works of all times includes: ‘The Crimson Kimono’ of (1959), ‘7 Women’ of (1966) and ‘Lila Quartermaine’ on the famous TV soap opera ‘General Hospital’ in 1978. It is indeed the strength of a woman that drove this strong woman. Despite the fact that she was in a wheelchair and paralyzed from her waist down as a result of a road accident, she still had the will and the strength to perform.

Anna Lee was given several awards during her life. These awards included: ‘Member of the Order of the British Empire’ for her distinguished and remarkable services in drama. In 1998, she was awarded the ‘Soap Opera Digest Award for Outstanding Actress in a Supporting Role’ for her role in ‘General Hospital.’ “Soapy Award for the Favorite Woman in a Mature Role” for her role of the matriarch in the great ‘Lila Quartermaine’ in ‘General Hospital.’ Finally, in 2004, Anna was subsequently awarded a Daytime Emmy Lifetime Achievement Award that was the climax of her lifetime work.

Anna Lee was also given one of the most prestigious award, the Star on the Hollywood Walk of Fame. It is here that she was awarded to be a Member of the Order of the British Empire. This came following her tireless contribution to the loved film and television industry.

Unfortunately, at the age of 91, her life finally came to an end on May 14, 2004, in Beverly Hills, California. This was as a result of a brief illness that shuttered the life a true iconic woman in the artistic industry. She was buried at the Westwood Village Memorial Park Cemetery in Los Angeles, California.