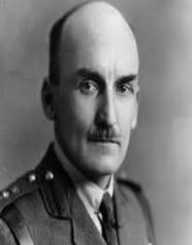 John Frederick Charles Fuller is a British officer known for his service to the military during the World War I as a strategist, author, war historian and advocate of the Fascist movement. He died on February 10, 1966, at the age of 87 in Cornwall, England.

Fuller was born in West Sussex England to parents Alfred and Selma Fuller on September 1, 1878. They relocated to the city of Lausanne in Switzerland when he was just a child but came back a few years later.

At the age of 14, he enrolled at Malvern College in Worcestershire, England.

In 1897, he enrolled at the Royal Military Academy Sandhurst (RMA). Initially, he failed to get in for being too short and that his chest was unsatisfactory to the academy's standards. He got admitted in the end and attended the school until 1898. While attending Sandhurst, he was nicknamed as "Boney" by his fellow cadets. It was due to his similarity to French military leader Napoleon Bonaparte's behavior and tactical knowledge that they adapted "Boney."

After graduating from Sandhurst, J.F.C. Fuller served his first tour on 1899 to 1902 at South Africa. Fuller was assigned to Oxfordshire Light Infantry's 1st Batallion.

After his assignment at South Africa, he was stationed to India in the spring of 1904. The following year, he contracted typhoid fever, and he was shipped back to England. Again in England, he met Margaretha "Sonia" Kamatz, whom he married in December of 1906.

When Fuller regained his health, he was appointed as adjutant to the 2nd South Middlesex Volunteers in England.

A Flair for the Mystics

J.F.C. Fuller had a deep inclination to the mystic arts. He was a known fanatic of Aleister Crowley, a famed English magician, and poet who founded the Thelema belief. A writing contest was held for reviews on Crowley's works during his service at First Oxfordshire Light Infantry. Fuller not only entered but won the said contest, being its only participant. However, when  Crowley was involved in a controversy regarding his sexuality, Fuller broke off from his ties for fear of his career. The essay he wrote for Crowley's contest was published in The Star in the West, one of his books that came out in 1907.


The Strategist in Action

Known for his brilliant mind, J. F. C. Fuller played a vital role in planning attacks on World War I. Fuller assisted in the strategizing the plan of attack for the Battle of Cambrai in 1917. The following year, he worked on the Autumn Offensive's tank operations. His Plan 1919, with a goal to exterminate the enemy's brain by a mass surprise tank attack, was not used. This plan of attack became the basis and was later adopted by the German Army which is known as the Blitzkrieg. The Germans most notable use of this tactic was during their invasion of Poland during World War II.

The Dawn of Mechanized Warfare

Being the accomplished man that he is, J.F.C. Fuller was best-known for his views on armored warfare. After World War I, Fuller worked with B.H. Liddell Hart on enhancing the British Army's modernization and mechanization. During this time, however, Fuller was becoming agitated during the slow process of tactical reform. He was at odds with the military personnel, and they reciprocated the feeling as well. As a result, Fuller turned down the officer as the lead on Experimental Mechanized Force. The reason for his refusal is the lack of staff that will assist him in the He rose to the position of major general before his retirement.

Because of his extensive knowledge of the war, J.F.C. Fuller wrote a lot of pieces that went as far as the prediction of future wars to come. This put him in hot waters with the public for his strong and almost aggressive wordings directed at both the military and the government.

Upon his military retirement, J.F.C. Fuller put his writing into practice. During the Italian invasion of Ethiopia in 1935, he served as a journalist documenting that transpired within that era. He also continued to do so during the Spanish Civil War that ran from 1936 to 1939. The following years, he met and befriended the member of British Fascist movement, Sir Oswald Mosley.  Not only did he become an acclaimed member of the Nordic League but he became Mosley's closest associates as well. From here on out, he became engrossed in the Nazis. He was invited and present at the first maneuvers display by Nazi Germany in 1935.

His inclination for the Nazis put him in suspicious eyes from his own country during World War II. Despite these suspicions, Fuller persisted writing praises for Nazi leader Adolf Hitler. Hitler appreciated the gesture, and he was invited as an honored guest during his 50th birthday celebration.

When World War II ended, J.F.C. Fuller spared no shame and expressed his utter distress and disappointment at the loss of Germany. He went as far as publishing his thoughts in the Reformation of War's 1961 edition. In it, he criticized US Presidents Churchill and Roosevelt for not being able to see Hitler as the redeemer that will save them from the Soviet Union.

With a brilliant mind like his, J.F.C. Fuller brought forth many literary works. When he resigned as a military officer, he poured his time and attention to writings. He wrote The Nine Principles of War which became the basis for military propositions. The United States Militia even adapted and based their training on his works. Due to his experience as military personnel, he wrote many books under the topic of warfare. Among these books, Memoirs of an Unconventional Soldier, The Reformation of War, and On Future Warfare, has been his critically acclaimed works. His most distinguished work, however, is his analysis of Western warfare from its conception through World War II. This masterpiece was published as "A Military History of the Western World."