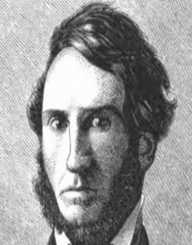 John Lloyd Stephens was an American archaeologist, explorer, writer, and diplomat. He was responsible for the rediscovery of ancient Mayan ruins and remains in Middle America.

John Lloyd Stephens was born in the borough of Shrewsbury, New Jersey on November 28, 1805. His father was Benjamin Stephens, a wealthy merchant. His mother was Clemence Lloyd, the daughter of a prominent judge. The entire family moved to New York City when he was a year old.

John Lloyd Stephens was classically educated in the private schools of Mr. Boyle and Mr. Joseph Nelson in New York City. He enrolled at Columbia University at the young age of 13. Four years later he graduated top of his class.

He spent a year studying law together with the attorney Daniel Lord, and then he enrolled at the Litchfield Law School. After completing his studies, he successfully passed the bar exam, and he started working as a lawyer.

John Lloyd Stephens took a somewhat active interest in politics and joined the Democratic Party. He was an active advocate for free trade, and he strongly opposed all types of monopolies. He frequently held speeches in small political gatherings.

Stephens was one of the candidates for the position of Minister to the Netherlands, but he ultimately did not get the job. Later on, he served as a delegate to the state constitutional convention, where he was responsible for the adoption of a small claims court.

After about eight years of work, John Lloyd Stephens was not truly satisfied by the practice of law. In 1834, he embarked on a journey through Europe and the Middle East. He started in England and France, continued through Italy, Greece, and other countries of Eastern and Southern Europe, and he finished off in Syria and Egypt. He was very intrigued by all the archaeological sites he visited.

John Lloyd wrote two books inspired by the trip: “Incidents of Travel in Egypt, Arabia Petraea and the Holy Land” and “Incidents of Travel in Greece, Turkey, Russia and Poland”. They contained drawings made by the English archaeologist and illustrator Frederick Catherwood, who was Stephens’ traveling companion. Both of the books became quite popular at the time.

In 1839, John Lloyd Stephens was appointed as a Special Ambassador to Central America by US President Martin Van Buren in order to negotiate a treaty with the country. He took off to the region together with his friend Frederick Catherwood. While he was there, the government of the Federal Republic of Central America fell apart, which resulted in civil war and political chaos.

Still, that did not stop him from fulfilling his desire to explore the area. He took a boat to Belize and then continued with a physically excruciating journey through the thick jungle in order to reach the ruins of Copan. When he finally arrived, he was absolutely astonished at what he was seeing. He found sculptured monoliths, decorated walls, carvings, hieroglyphs and massive pyramid-like structures.

John Lloyd Stephens managed to buy the entire site from the locals for $50 and restoration soon began. The heavy vegetation covering the ruins was cleaned up, so he started mapping the site and documenting his findings.

Over the next few years, John Lloyd continued to explore similar sites filled with Mayan ruins in Middle America. In total, he visited 44 places, such as Tulum, Chichen Itza, Mayapan and many others.

John Lloyd Stephens' work served as an inspiration to the poet Edgar Allan Poe, who reviewed some of his books for the New York Times and Graham’s magazine.

For a long time, England was the only country that organized ocean travel to and from the United States. Stephens changed that by obtaining a charter from the state of New York and incorporating the Ocean Steam Navigation Company.

The company owned two steam ships, the Washington and the Hermann, which started making trips to Europe across the Atlantic Ocean.

In 1849 the Panama Railroad Company was started. Its goal was to build a railway in Central America parallel to the Panama Canal, connecting the Pacific and the Atlantic Ocean.

John Lloyd Stephens was chosen to be the Vice President, and soon after the President of the company. He made frequent travels to Panama and New Granada in order to oversee the building of the railway.

While traveling to Bogota, the capital of New Granada, John Lloyd Stephens fell off his mule, and sustained heavy injures that left permanent consequences on his health. A couple of years later, he suffered from a disease of the liver.

John Lloyd passed away on October 13, 1852, at the age of 46. He was then buried at the New York City Marble Cemetery. His grave contains a monument designed with Mayan glyphs.

Americans and Europeans used to believe that all Native American ethnic groups, including the Mayans, were underdeveloped savages that were utterly incapable of building a proper civilization.

Even upon finding ruins, they concluded that they must have been built by other groups of European or Asian people who had lived on those lands in ancient times. They refused to believe it was the Natives who had those capabilities.

John Lloyd Stephens helped change that perception. His two books regarding his travels to Central America described the remains of developed ancient cities that contained many temples, plazas, pyramids and elaborate living areas, as well as valuable art such as sculptures and pottery.

All of the findings he wrote about were accompanied by careful illustrations from his traveling companion Catherwood, which further increased the impact and the beauty of the objects. Stephens explained there was no doubt in his mind it was the Mayans who had built everything he saw, proving that they were a developed and prosperous civilization.

John Lloyd Stephens'  books became known in both the United States and the United Kingdom. The readers were very intrigued by the subject and given his proven expertise and reputation, they believed his words. This way, he managed to give the Mayan people the respect they deserved.