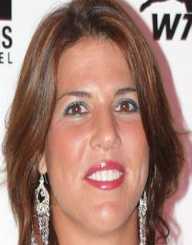 American tennis player Jennifer Capriati was born on the 29 March 1976 in New York City. After living in Spain for a number of years, the family relocated to Florida. Her parents are Denise and Stefano Capriati.

Jennifer Capriati showed the talent for tennis at a young age when she won the Junior Orange Bowl. She first won the 12-year old category and then the 14-year old group. In the history of the Junior Orange Bown, only nine tennis players have won twice. Those players include Jimmy Connors, Andy Murray, and Monica Seles.

After turning professional in 1990, Jennifer Capriati won her first professional title, at the Puerto Rico Open (1990) and was ranked in the WTA Top 10, setting a record as the youngest player to have achieved this. In 1991 she reached the semifinals at the U.S. Open as well as at Wimbledon. At the 1992 Summer Olympic Games held in Barcelona, Spain she won a gold medal by beating Steffi Graf. In 1993, Capriati lost in the first round of the U.S. Open and took time off. She returned to the tour in `1994 but did not regain her former form.

Between 1994-1998, Jennifer Capriati won one match at a Grand Slam tournament.  By 1999, Capriati had started to regain her form and was ranked No.23 and the following year, No. 14. She won the Australian Open in 2001 and regained a position in the top ten. Her success continued at the French Open, and then at Wimbledon, she lost a semifinal. She managed to defend her Australian Open title (2002). In 2004, she began to be bothered by a back injury and finished the year at No.10. In 2004, she retired from professional tennis, aged 28.

Jennifer Capriati was charged with shoplifting an inexpensive jewellery item from a mall in 1993. She later said that it was unintentional. In 1994, she faced a charge of marijuana possession and spent 23 days in rehab in Miami. She then said that she had contemplated suicide in 1994, due to burnout. Capriati was treated for a drug overdose in 2010.

In later years, Jennifer Capriati was charged with stalking and battery after a 2013 incident involving a former boyfriend. As a result of the charges, Capriati had to undergo an anger management programme as well as serve 30 hours of community service. Throughout her career, Capriati’s father was seen as a controversial figure because of the belief that he pushed her too hard and had too much influence over her as a player.

In 2012, Jennifer Capriati was inducted into the International Tennis Hall of Fame.