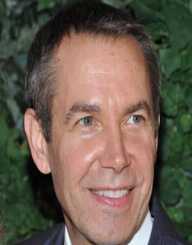 Jeff Koons is a celebrated American artist famous for his knack for using common objects and transforming them into contemporary art installations. He was the recipient of the 2017 Honorary Membership Award bestowed by the Edgar Wind Society for his Outstanding Contribution to Visual Culture at the University of Oxford in England. Prior to that, he also received from the Royal Academy of Art the Wollaston Award in 2008. He was also appointed in the French Legion of Honor as a Chevalier back in 2002 and promoted to Officier status five years later in 2007.

Koons is an avid fan of famed artist Salvador Dali. He revered the famed artist so much that he visited Dali once when he was a teenager when the artist was staying in New York City at the Regis Hotel. In his earlier days as an artist, he often drew a pencil mustache on his face and even dyed his hair red.

He married again this time to Justine Wheeler whom he met in 1995. The couple has six children together and resides on the Upper Eastside townhouse.

Prior to his marriages, Koons impregnated a woman during his college years of which both he and his partner gave the baby up for adoption. The baby, who was later named Leslie, reunited with Koons in 1955.

Koons was born on January 21, 1955, in York, Pennsylvania to furniture dealer and interior decorator Henry Koons, and seamstress Gloria Koons. As a way of attracting customers, his father would put out the works of the young Koons on his shop’s window. As a way of earning money, Koons grew up selling candy & gift-wrappers.

Directly involved in furniture-making, Koons took an interest to the art. He took a painting degree and enrolled at the School of the Art Institute of Chicago and later took on his master’s degree in Baltimore at Maryland Institute College of Art. Koons met Ed Paschke when he was visiting at the art institute. Paschke served as the mentor of Koons wherein the younger worked as the former’s studio assistant during the late 1970s.

He immediately left for New York in 1977 upon graduating from college and found employment at the Museum of Modern Art. Koons took a job as a broker to support his passion for the arts.

During the 1980s, Koons became known for his artistic prominence and his method of production called art fabrication. He set up a factory similar to a studio with assistants assigned and focused on different aspects of his works so as to make the product look as if it was made from one hand. From there, he made a variety of works namely the Early Works, The Pre-New, The New, and Equilibrium, the Statuary, Luxury and Degradation, Made in Heaven, and the Puppy to name a few. One of his more famous works would be the balloon dogs that are coated independently in various colors topped with a chrome finish. His orange Balloon Dog has sold for $58.4 million dollars in Christie’s Post-War and Contemporary Art Evening Sale held on November 12, 2013, in New York City. This made Koon the title-holder of most expensive work sold by a living artist.

Due to his terrible experience with former wife Staller, who whisked his son away to Italy unannounced, he established International Centre for Missing & Exploited Children (ICMEC). He also serves as a board member of the said organization. He founded the non-profit and global organization to fight for the rights of child trafficking, abduction, and sexual exploitation. He founded the Koons Family Institute on International Law and Policy that works alongside the ICMEC back in 2007 with second wife Justine.