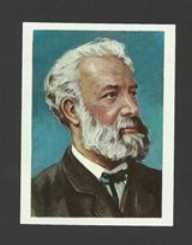 Jules Gabriel Verne was a French poet, playwright, and novelist born in 1828 in Nantes, France. He is famously known for his notable works in science fiction and adventurous writings like ‘Around the World in Eighty Days.’ His insights as revealed in his writings bare tokens of intelligence and though he is dead, his works remain impactful. He is remembered as one of the major authors both in France and around Europe with much of his works translated.

Jules Verne was the firstborn son of lawyer Pierre Verne and Sophie a family which lived a middle class life. He was born in Nantes, France on 8 February 1828 and spent his childhood years in this maritime port city. His adventurous nature was aroused by the constant view he had of these vessels both on dock and departure. Characterized by a life of imaginations, Jules had hoped that one day his imaginings would become practical realities.

When Jules Verne was five years old, his parents took him to a boarding school at 5 Place du Bouffay in Nantes. It is here that Verne decided to pen down his imaginations in the form of poetry and short stories. With much fascination about what happens on the sea, Verne at the age of 11 began working as a cabin boy. When his father noticed this secrecy, he stopped the voyage before it launched to sea. Jules was forced to promise his parents that he will only tour the world in his imaginations only. However, this story has been considered as a tale and legend of 1839. Verne was taken to Paris by his father to study law in 1847 and also to make him forget about Nantes for a while.


Career as a Playwright

Although Jules Verne went to study law in Paris, Verne had secretly begun a literary career, and he loved the theatre as well. He derived his inspiration from artists and writers he met in Paris like Alexandre Dumas together with his son Alexandre Dumas fils in 1849. Verne and Dumas fils began working on a manuscript Verne had written earlier that was to become a theatre play. It was a comedy known as Les Paillesrompues which was performed at the Theatre Historique, Paris in 1850, 12 June.

Verne was rather a stubborn young man who disregarded studies to pursue writing. His father’s attempts to persuade him to go back to school were in vain as Verne continued writing and also refused to practice law. He ignored his father’s advice and resorted for a low paying job from 1852 to 1855 as a secretary at a Paris theatre. Verne rather continued with writing, and he was privileged to produce two plays ‘Companions of the Marjolaine’ (Compagnons de la Marjolaine) and ‘Blind Man’s Bluff’ (Le Colin-maillard).

When Jules Verne visited Amiens, France in 1856, Verne met Madame Morel and fell in love with her although she was a widow. He married her in January 1857 even though he did not have a stable financial state. He opted for a stockbroking job like his brother-in-law but also engaged so tirelessly in writing. The couple had one child Michel Jean Pierre Verne born in 1861.

The first publication Jules Verne made was in 1863 known as Five Weeks in a Balloon which highlighted the journey over Central Africa by air. With this publication inviting a major success, Verne retired from stock broking and ventured into full time writing. The other books that earned him popularity include ‘A Journey to the Center of the Earth’ (1864), ‘The Adventures of Captain Hatteras’ (1866), ‘From the Earth to the Moon’ (1865) and ‘Around the Moon’ (1870).

His later famous works which he wrote in his forties included ‘Twenty Thousand Leagues Under the Sea’ (1870), ‘Around the World in Eighty Days’ (1873), ‘The Mysterious Island’ (1875) and ‘Michael Strogoff’ (1876). In essence, Jules Verne had written about eighty books which have little or no value today. Verne also bought a ship to ease his travels around the world by which he made several sailings to ports and places that added to his ideas on writing.

Jules Verne struggled with his rebellious son whom he sent to reform school in 1876 and was shot in the leg by his nephew in 1886 which made him limp in his later years. He also lost his mother and friend Hetzel his fellow publisher and collaborator. Verne is remembered for his notable novels and books which were earlier considered fictitious but later on became practical realities. Jules Verne was diagnosed with diabetes and died on March 24, 1905, as a legend in the literary world.