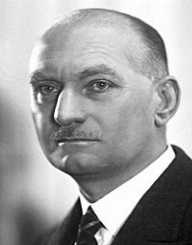 Known as an eminent psychologist, Ulf von Euler’s credibility was highly recognized when he earned the Nobel Prize in Medicine. He fully concentrated on the mechanics and study of nerve impulses that greatly positively influenced the world. Just like charity begins at home, Ulf’s opted to follow his family’s footsteps. His parents greased their elbows as prominent scientists of the 19thc-century.In fact, his father was the co-holder of the Nobel Prize for Chemistry in the 1920s. His caring grandfather invented a variety of chemical elements including holmium and thulium. His great-great-great-great grandpa named Leonhard Euler hailed as a physicist and mathematician.

In short, his background acted as a stepping stone that directed him to the path of success. It was after his preparatory education that he went to major in medicine at Karolinska Institute. His love for research and analysis made him serve as an Assistant Professor before earning his doctoral degree. He took hold of the chance to work as a scientist in England, Germany, and Belgium. Without further ado, his discovery started with a simple illustration of a compound called substance-P. This is what paved the way for future discoveries. Scroll further.

On 7th February 1905, Ulf von Euler was first seen in the world in Sweden, Stockholm. His protective father, Hans Karl August Simon von Euler served as a biochemist. In the process, he received a Nobel Prize in Chemistry in 1929.
His dearest mother was known as Astrid M. Cleve von Euler who rose to fame for holding a doctoral degree in botany. She was also the eldest daughter of a Professor of botany called Per Teodor Cleve. Not to mention, Astrid acted as a leading Researcher at the University of Uppsala.

At his tender age, Euler loved to play with his five siblings. Unfortunately, his parents parted ways in 1912 where his father remarried Elisabeth Baroness Ugglas. At first, his father thought that Ulf creativity would come to an end due to his mother’s absence. Luckily all went well to the latter.

It was quite hard for Ulf to choose another career since it seemed that his family loved everything that dealt with science. He first joined the school at Stockholm and later in Karlstad. In the mid of 1922, he was taken to Karolinska Institute where he majored in nothing else than medicine.

It was in the course of his studies that Euler started to work on his research along with Robin Fahraeus. Afterward, he opted to work on a study called vasoconstriction. The study entailed the shrinkage of blood vessels that later brought forth the construction of small and large arterioles.

Early in 1926, Ulf von Euler started to work at the Department of Pharmacology as an assistant of Goran, the scientist. Simultaneously he started to work a dissertation where he earned his doctoral degree in 1930.

Still, in 1930, Ulf got a seat as Assistant Professor Department Pharmacology at Karolinska Institute. The same year he earned a Rochester Fellowship where he went to further his studies overseas. He first traveled to England where he met John H. Gaddum. The two worked together at Sir Henry Dale’s laboratory in London. While still there, Euler started to investigate the biological function of rabbits. At the end of his study, he proved that certain compounds were immune to atropine. He came to name it as Substance-P.

In the same manner, substance-p decreased the level of blood pressure as well as leading to the contraction of muscles in rabbits. After thorough research and investigation, he shortened his discovery with a name titled polypeptide structure.

In 1934 Ulf Euler commenced with his second discovery. In a short pause, he came up with another compound dubbed as prostaglandin. This was illustrated as a unique tissue that extracts fatty acids in human and sheep glands. Further, he came to realize that the prostaglandin is quite unsaturated and lastly a nitrogen-free compound. His research paved the way for growth and properties of the compounds purification and extraction.

After a successful result, Euler opted to concentrate on another study. It was an active substance titled as vesigandin. He then traveled to London where he majored in the study of chemical synapse called neuromuscular transmission. While still in London he partnered with G. L. Brown.

In 1939 Euler saw himself as a Professor at Karolinska Institute. He remained in the position till the end of 1971.The 1939s WWII in Norway didn’t hinder him from continuing his research. With a never give up the soul and sleeve up on his hands Goran and Euler discovered a Euler-Liljestrand mechanism. It was a mere connection between blood circulation and ventilation of the lens. In the mid of 1942, Ulf discovered a peppery-smelling liquid called piperine.

For a year, he went to Buenos Aires where he partnered with Eduardo Braun-Menendez. In between, he identified a substance called norepinephrine, which is said to be his one of a kind invention. Afterward, he discovered another compound called noradrenaline. After a though research and investigation, Ulf and his team established that norepinephrine seemed to work as a neurotransmitter. It was later finalized that the neurotransmitter stored synaptic nerve terminals in a place called intracellular vesicles.

Before the closure of his career, Ulf opted to work on a wide array of chemical agents. It was there that he tried to regulate the circulation, blood pressure and respiration processes. Allow me to define him as a zeal researcher who had a close relation with his laboratory. Not to mention he was also defined as a mentor and out of world teacher. He effortlessly advised his students to venture into profitable deals and to always act as a listener and then a dourer.

Just like his great-great-great grandpa, Leonhard who hailed as a remarkable mathematician, Euler’s work was noted when he discovered the transmission of nerve terminals. In fact, he went out to invent the full mechanisms of their inactivation and storage. It was the only work that earned him the Nobel Prize for Medicine which he shared with Julius Axelrod. When it comes to his personal life, Ulf Euler tied a nuptial knot with Jane Sodenstierna with whom he had two sons called Johan and Hans. The union also had two daughters called Marie Jane and Ursula Katarine. Ulf was lucky to father bright sons and daughters. It was in 1957 that Ulf and his wife parted ways where he married Carola Adelaide on 20th, August 1958. The couple didn’t have a child or children of their own. Sad to say on 9thn March 1983 Ulf von Euler breathed his last due to major complications.