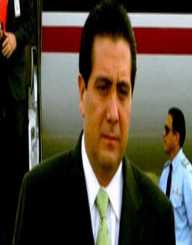 Martin ErastoTorrijos Espino was born on July 18, 1963, in Chitre, Herrera, Panama. His father, Omar Torrijos was a social reformer and a military man from 1968 until his death in 1981. Omar died in a plane crash. Torrijos was an illegitimate child and was raised by his mother. However, when he was a teenager, his father publicly acknowledged him.

Torrijos attended and graduated the St. John’s Northwestern Military Academy in Delafield, Wisconsin. After finishing the military academy, he went on to study political science at Texas A&M University. To support himself, Torrijos was working at McDonald’s as a manager.

In 1994, Torrijos began serving as the deputy minister for the interior and justice under president Ernesto Peres Balladares. He signed the law which completer the privatization of Panama’s water utilities. Balladares proposed a referendum that would allow him to seek a second consecutive term, but he was not successful. After this, Torrijos was named as the representative of the PRD party for the 1999 general election. He ran the campaign with a lot of support of his father’s money with a slogan “Omar lives.” However, the scandals of corruption in the party led to Torrijos loss to Mireya Moscoso.

In 2004, Torrijos once again ran for the presidency. His campaign focused on strengthening democracy and negotiating a free trade agreement with the United States. This time, Torrijos received a 47% vote. Before leaving office, Moscoso pardoned four men convicted of a plot to assassinate Fidel Castro during his visit to Panama. This led to Cuba breaking off diplomatic relations with Panama and Venezuela recalling its ambassador from the country.

During his term as the president, Torrijos often struggled with unpopularity amongst the people. His government proposed an increased pension contribution and raised the retirement age. These changes led to several protests, strikes and student protests at the University of Panama. After this, Torrijos postponed his plan to raise the retirement age, as well as his plan to reform social security. In 2006, Torrijos postponed the widening of the Panama Canal. The public later approved his plan to double the canal's shipping capacity with a 78% vote.

In 2006, Torrijos favored Puerto Rico’s independence from the United States. In 2007, Torrijos went into negotiations with the office of George W. Bush, for the Panama-United States Trade Promotion Agreement. Torrijos regained popularity by the end of his term, but he could not run for the consecutive second term since the constitution forbade it.