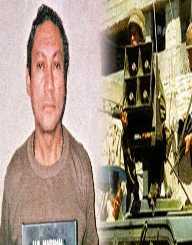 Manuel Noriega was a Panamanian military officer and politician and who also worked as an informant for the Central Intelligence Agency (CIA). Born on February 11, 1934, he became a military dictator of the country from1983 to 1989 and was ousted during the United States of America invasion in December 1989. Before rising to power, Noriega started as an officer in the Panamanian army and with his association with Omar Torrijos rose through the ranks to become the chief of military intelligence in 1968, after the Torrijos led the coup. Torrijos died in 1981, and Manuel Noriega capitalized on that to become the de facto leader of Panama in 1983. Throughout his leadership until his last day in office, Manuel Noriega worked closely with the United States CIA and became a valuable intelligence asset for the Agency.

Manuel Noriega also acted as conduitfor military equipment, illicit weapons and for cash for theUS-backedcounterinsurgency forces in Central and South America. Even though the United States knew of Noriega’s involvement in cocaine trafficking, they allowed it because Manuel Noriega was an asset in their military operations in Latin America. His leadership was characterized by the suppression of the media, prosecuting of political opponents and expansion of the military. These and other attempts to sell intelligence to opponents of the US resulted in the US invasion of Panama in 1989 leading to his arrest. In April 1992, Manuel Noriega was tried and convicted on eight counts of drug trafficking, money laundering, and racketeering and sentenced to 40 years in prison on September 16, 1992. The sentence was later reduced to 30 years.

Manuel Noriega was born on February 11, 1934, to Ricaurte Noriega and his domestic worker. Born into a poor family of Columbian descent, he was brought up in a slum of Terraplen by his godmother. Manuel Noriega received education from Instituto Nacional, one of the topmost high schools in Panama City. Manuel Noriega won a scholarship to the Chorrillos Military School in Lima, with support from his elder brother Luis. Manuel Noriega graduated with a specification in engineering in 1962.

After his education, Manuel Noriega returned to Panama, where he was commissioned as a sub-lieutenant in the Panama National Guard and posted to Colon. This is when he got closer to Omar Torrijos and would later become his supporter. During this time, Manuel Noriega grew notoriety and is alleged to have raped a 13-year-old girl, threw a priest from a helicopter and also raped a prostitute but got away unpunished with the help of Torrijos. In 1967, Manuel Noriega traveled to the United States and also spent months to undertake courses at the School of the Americas at the United States Army’s Fort Gulick in the Panama Canal Zone. Manuel Noriega took courses in counterintelligence, jungle operations and infantry operations. At the Fort Bragg in North Carolina, he took a course in psychological operations.

Omar Torrijos led a coup to topple the government of President Arnulfo Arias in 1968. After the coup, Manuel Noriega supported Torrijos in the power struggle, and this granted him favor in the sight of Torrijos. Manuel Noriega gained promotion to lieutenant colonel and was appointed a chief of military intelligence. Being a confidant of Torrijos, Manuel Noriega foiled a coup attempt against Torrijos. During this period, he negotiated the Torrijos-Carter Treaties with US President Jimmy Carter. The treaty would give Panama the control of the Panama Canal in 1999.

Manuel Noriega acted as Torrijos law enforcer and made sure policies set are being enforced even if not popular. July 31, 1981, Torrijos died in a plane crash through a bizarre means, and this started a power struggle in the military ranks. Noriega was able to work himself through to gain enough powers. In 1983, he promoted himself to the rank of colonel to have enough power. Manuel Noriega strategically brought all leaders of the various factions into the Panama Defence Forces and convinced Ruben Dario Paredes, the leader of the Panamanian armed forces to hand him his position in return to contest as President. Noriega, however, did not fulfill this promise as he got Paredes arrested after assuming the position.

Manuel Noriega, therefore, appointed himself the general and head of the Panama Defence Force, making him the de facto leader of Panama. Manuel Noriega did not want to become the President, but rather be behind the scene, giving instructions just to avoid him being scrutinized. His rule was much repression of opposition leaders, media, illicit drug trade, corruption and money laundering. Even before the US invasion of Panama leading to his capture, there were two unsuccessful coup attempts against him in 1989.

Manuel Noriega involvement with the Central Intelligence Agency (CIA), dates back to the late 1950s and worked with them until the 1980s. He started receiving formal payment from the Agency in the 1970s. He later discovered the CIA was spying on him too in 1976 and therefore offered a bribe to soldiers involved to provide him tapes of the US spying effort in Panama. Manuel Noriega served as the conduit for the United States in different capacities including on weapons and funds to the US efforts military support in Latin America. Although the US knew Noriega was in drug deals, they turned a blind eye on it because Manuel Noriega was deemed him as a valuable asset for the country in terms of giving out information on other Latin American leaders and the military help.

The United States of America invaded Panama on December 20, 1989, in what is termed as the largest military actions since the Vietnam War. About 27,000 soldiers and 300 aircraft were used in this action. The US force’s main target was Noriega’s private vehicles nonetheless slums in the middle of Panama City were heavily bombarded. The US army suffered casualties between 23 and 60 and 300 wounded while the Panamanian forces also suffered between 300 and 845 casualties. Manuel Noriega surrendered on  January 3, 1990, after taking refuge for days in the Apostolic Nunciature, the Holy See’s embassy in Panama.

He was detained as a prisoner of war to the United States. While in the US, he was tried and convicted of eight counts of drug trafficking, racketeering, and money laundering by the United States District Court for Southern District of Florida in April 1992. Manuel Noriega was sentenced to 40 years in prison on September 16, 1992.  The sentence was reduced to 30 years and later to 17 years for good behavior. Noriega’s sentence ended on September 9, 2007, but was extradited to France on February 20, 2010, upon a request of the French government on charges of money laundering.

Manuel Noriega was married to Felicidad Sieiro de Noreiga. The two first met in the 1960s. They had three daughters; Lorena, Sandra, and Thays Manuel Noriega. Manuel Noriega died on March 21, 2012, at age 83, after undergoing a brain tumor surgery while serving his prison term in Panama.