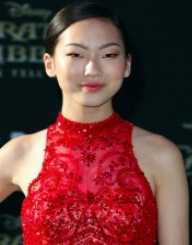 American child actress Madison Hu was born on June 2, 2002, in Longview, Texas. At the age of 2, Madison’s family consisting of her parents and her brother moved to the city of Los Angeles in Southern California. Though Madison is American by birth, she is originally of Chinese descent. Shortly after moving to Los Angeles, Madison began getting acting offers.

Madison Hu bagged her first acting project in the year 2011. At that time she was just nine years old. She was seen in an episode of the show ‘I Kid with Brad Garrett.’ Her acting debut was not a big one, but she managed to gain a little bit of recognition from the small role. Post her debut, she continued to stay out of the limelight and concentrated more on her schooling. At the age of 12, Madison returned to the acting circuit with the shows ‘The Goldbergs’ and ‘Tosh.0’ in 2014. With her acting prowess, she caught the eye of many producers and directors.

Madison Hu performed brilliantly at the audition for the show ‘Best Friends Whenever’ and bagged a role in the show in 2015. This show was her big break, and she played the character of Marci in the show. She was also seen in small roles in other programs like ‘Grace and Frankie’ and ‘The Kicks.’ Soon after that, Madison pocketed the lead role in Disney Channel’s popular sitcom ‘Bizaardvark.’ In the show, she portrays the character of Frankie.

Madison Hu has cemented her position as a versatile television actress. She has already proved her versatility with the diverse variety of roles she plays on the Disney Channel and through her other acting projects as well. Apart from being a television star, she was also seen on the big screen in the blockbuster hit film ‘Bad Words.’ In the film that released in 2013, she played the role of Ling Quan, a spell-bee contestant. Madison’s natural acting coupled with her perfect comic timings and facial expressions makes her a complete performer.

The bubbly star is very active on social media and is hugely popular too. Madison Hu has over 5k followers on Twitter and over 210k followers on Instagram. She also has a Facebook page.

Madison Hu is an easy going artist who bonds well with all her co-stars. She has a very optimistic attitude towards life and tries to take criticism positively and use the feedback to better her acting skills. She always wears a warm smile which makes her an affable teen. The 14-year-old oozes a sense of youthful exuberance.

Madison’s talents are not just restricted to acting. She has also tried her hand at sports, dance, and singing and has excelled in all of them. She is an excellent swimmer and has learnt ice skating. Her musical sense is also top-notch. She loves to play the piano and guitar and frequently uploads her singing videos on the video-sharing site YouTube. At school, she is a bright student who actively participates in all kinds of co-curricular activities.

Madison Hu is a pure entertainer, and during her free time, she entertains her family and her friends on the sets of her show. Her best friend is her ‘Bizaardvark’ co-star Olivia Rodrigo. Olivia plays the role of Paige on the show. Both of them are very active on social media and quite often share their pictures on social networking sites like Instagram and Twitter.

Madison loves to eat food, and her favorite is a simple ham and cheese sandwich. Her favorite cartoon is ‘Dora the Explorer,’ a show that airs on the channel Nickelodeon. She is very fond of her dog named ‘Marshmallow.’ Till date, she has not been romantically linked up with anyone. She wants to focus only on her studies and her acting. She aims to make it big in the entertainment industry and make her parents proud.