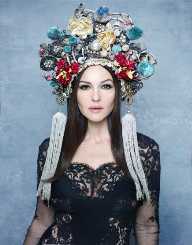 Monica Bellucci is an Italian model and actress; she is best known for her roles in The Passion of the Christ and Spectre.

Monica Bellucci was born in Umbria, Italy on 30 September 1964. She was the only child born to Pasquale Bellucci and Brunella Briganti. Bellucci grew up in the town of San Giustino. She studied law at the University of Perugia. She originally took up modeling to pay for her college fees but would drop out of her course to pursue a career in modeling.

Monica Bellucci moved to Milan in 1988 which is where she signed with Elite Model Management. Bellucci would appear at fashion shows in New York and Paris within a year. She has modeled for the leading fashion brands, Dolce & Gabbana and Christian Dior. She made her first film appearance in the Italian film, La Riffa, in 1991. The following year she had a minor role in Bram Stoker’s Dracula. The film was directed by Francis Ford Coppola and starred Gary Oldman and Anthony Hopkins. In 1996, Bellucci appeared in the French film, The Apartment. She received praise for her performance, but the film was a commercial failure. Bellucci enjoyed greater fame in both modelings and acting in the new millennium. In 2000, she starred in the Italian film Melena. The film was a moderate success. She was named as a sex symbol and in some lists of the world’s sexiest women by Maxim, Men’s Health and AskMen.

In 2002, Bellucci played the lead female role in the controversial French film Irréversible. Its high levels of violence characterize the film. Bellucci’s character is graphically raped during the film in a scene that lasts for some minutes. It was this scene that drew the most criticism of the film. Bellucci posed nude for Vanity Fair in 2004 while pregnant. In 2003, Bellucci received a major role in the big-budget Tears of the Sun. Bellucci plays an American doctor trapped in civil war Nigeria. Bellucci appears alongside Bruce Willis in Tears of the Sun. The same year she played Persephone, the wife of Merovingian, in The Matrix Revolutions.

In 2004, Bellucci played Mary Magdalene in Mel Gibson’s, The Passion of the Christ. 2005 saw Bellucci appear alongside Matt Damon and Heath Ledger in Terry Gilliam’s The Brothers Grimm. Bellucci became the face of Dior in 2006. In 2012, she became the face of fashion brand Dolce and Gabbana. She is signed to model agencies in Milan, New York, and London. In 2015, she became the oldest James Bond girl when she played Lucia Sciarra in the film, Spectre. Bellucci voiced the character Kaileena in the second Prince of Persia game.

Monica Bellucci married actor Vincent Cassel in 1999. They had starred alongside each other in the film, The Apartment, in 1996. Together they had two children, Deva and Léonie. Bellucci and Cassel separated in 2013. Bellucci announced that she was agnostic during interviews promoting The Passion of the Christ.